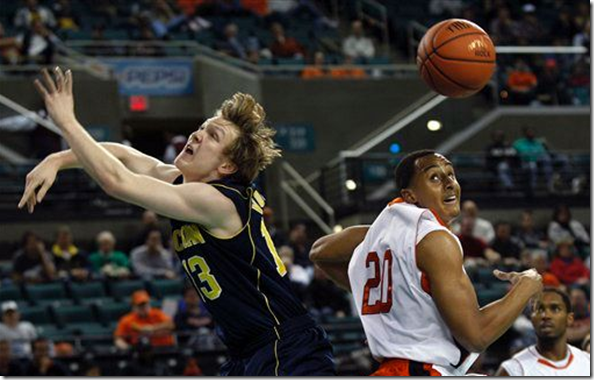 Michigan had played surprisingly well in their first four games but they finally hit the wall. Playing in their second game in as many days, the Wolverines were beaten in almost every phase of the game. After the Syracuse loss I wrote that Michigan would probably have a handful of plays they wanted back, today they probably only have a handful of plays that they wanted to keep.

We knew this team was going to be inconsistent. We knew they were young and we knew they had were going to have problems scoring the ball. But this was the first time we were forced to see it with our own eyes. Michigan didn’t execute on either end and were painful to watch. It was UTEP’s 13-0 run, which coincided with Michigan’s 13 minute field goal drought, that ended Michigan’s chances.

UTEP played tight man-to-man defense, face guarding the wings and completely denying the ball, and completely shut down Michigan’s offense. Beilein’s offenses have typically fared reasonably well against some pressure defenses (UCLA and Minnesota come to mind) but today there were unable to get anything going on that end. Michigan continued to try to run their offense through the big man in the high post but UTEP refused to guard him.

The UTEP offense was powered by Julyan Stone, Randy Culpepper, and John Bohannon, the trio combined to shoot 19 of 26 from the field and score 44 points. Culpepper scored off screens, scored off turnovers, and just couldn’t be stopped. Perhaps the most painful part of Michigan’s defense was their inability to defend, seemingly routine, inbound plays. UTEP had at least 10 points that came off wide open looks from out of bounds plays.

Despite their lethargic play, Michigan was able to at least stay reasonably close because they won the turnover battle and got to the free throw line. They couldn’t get anything going on the offensive glass but did a great job on the defensive glass. The difference in the game was quite obvious for anyone that watched it, Michigan (35 eFG%) couldn’t shoot and UTEP (54 eFG%) could. UTEP did most of their scoring on the interior, scoring 42 points in the paint to Michigan’s 12.

There were several coaching decisions that are worth debating but two of them stood out. First, Michigan went with their small lineup often in the second half, even playing Smotrycz at the five for a stretch. Douglass (37), Novak (37), and Morris (35) all played major minutes, which I suspect is due to Michigan’s inability to get stops and cope with UTEP’s ball pressure. Second, Michigan went to a pressing and trapping defense in the middle of the second half. This created a faster tempo, 68 possessions, which seemed to lead to far more easy UTEP baskets than turnovers.

After watching a game like that, it’s tough to muster any positive thoughts. Michigan won’t have time to lick their wounds for long, they’ll head to South Carolina to face Clemson in the Big Ten/ACC Challenge on Tuesday.  Player bullets after the jump.