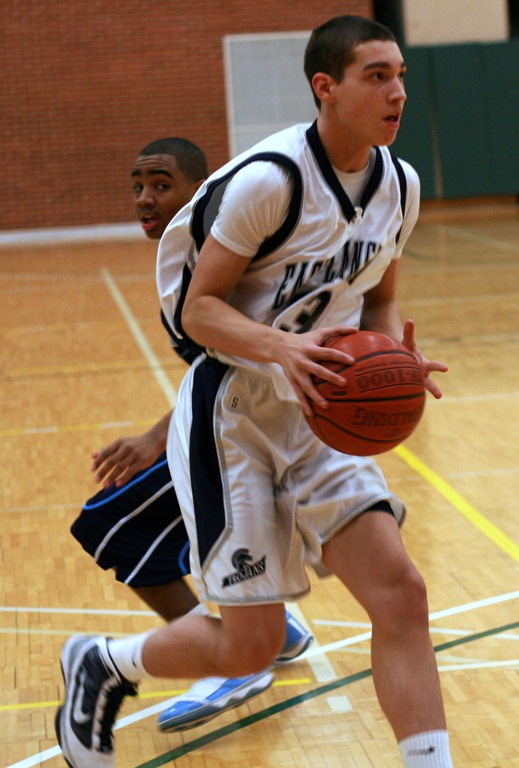 Steven Haney Jr. 6-foot-6, is a lights-out shooter in the class of 2013 from the Lansing area who recently transferred from East Lansing High School to Lansing Eastern, where he’ll play alongside LaDontae Henton and Charles Tucker. He has already taken a few unofficials to Michigan and his primary recruiter has been LaVall Jordan. For more info, check out this recent report from Bank Hoops:

Haney seems to channel big West Coast jumpshooters like Tracy Murray, Reggie Miller, Tom Lewis and Don MacLean, who piled up ridiculous high school scoring numbers. Haney has a really quick release, and doing it at that height, it’s hard to defend. He showed some grit with rebounds in traffic. Haney’s fearlessness and improved playmaking was evident against Country Day, when he drove right at Amir Williams before dishing to Henton for an assist. He’ll likely end up a better and more fluid athlete than he is right now, young and growing into is body.

I caught up with Steve this evening and here’s what he had to say on his recruitment:

Describe your game. I would say I’m a wing with good size and length.

Any early offers? No.

What did you do? We tailgated with the team and walked through Crisler Arena, sat with some of the coaches and talked. The we watched the football game and had a good time.  It was a lot of fun.  I liked all the coaches a lot.

Lavall Jordan has been the one primarily recruiting you, right? Yeah.

What do you think of him and the other new coaches? He’s really cool and from who I’ve talked to everyone’s real nice.  I like coach Beilein a lot and all the other coaches, too.

Any more Michigan visits planned? I’m not sure right now, but I’m sure I’ll come up for a few more home games this season.

Any visits planned for other schools? I’ve been to a couple MSU games this year so far and I’ll probably be back to see a couple more of those, too.

What did you like about Michigan? I really liked the coaches and players and I also liked how they’re building a new practice facility.  From the games I’ve been to before, I’ve liked the atmosphere at their games.

How do you see yourself fitting into Michigan’s offense? They shoot a lot of perimeter jumpshots so I think I’d be able to do well.

What are you focused on improving about your game right now? I’m working on improving everything but mostly strength.

Do you have a timeframe for when you’d want to commit to a school? Not really positive, but I’d like probably sometime in between junior and senior year.

Any player that people compare you too? Some people have made some Bird comparisons.

What ultimately goes into your decision? I like to play against good competition and with players I get along with well.