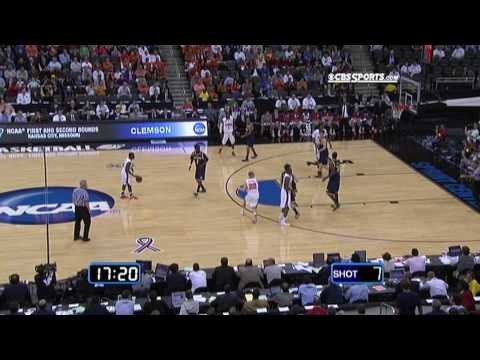 Michigan followed up their disappointing three point loss to Syracuse with an even more disheartening performance versus UTEP. After two quick days of film and practice, Michigan is back on the road and headed to Clemson, South Carolina, in preparation for their first true road game of the season. You might wonder the last time Michigan won a true road non-conference game: December 7th, 2006 at Miami (OH).

It was just 20 odd months ago when these teams faced off at the Spring Center in Kansas City for an NCAA Tournament First Round game. Only three starters from that game remain on their respective teams rosters. Demontez Stitt for Clemson and Stu Douglass and Zack Novak for Michigan. Three other current Tiger starters came off the bench in that game: Tanner Smith, Jerrari Grant, and Andre Young. The greatest difference between then and now is on the end of the bench with the coaching staffs. Clemson head coach Brad Brownell, formerly of Wright State, is in his first season at the helm for the Tigers.

Brownell provides an entirely different style of play than former coach Oliver Purnell. Brownell is still considered a defensive minded coach but he prefers to slow the game down. Michigan fans are all too familiar with the difficulties of implementing new offensive systems – on the hardcourt and gridiron – however the Brownell era has gotten off to a smooth start as Clemson has won five of their first six games.

What The Tigers Do Well

The good news for Michigan is that John Beilein’s schemes are designed to counteract the two things that Clemson does best – forcing turnovers and getting to the free throw line. Beilein’s teams are routinely one of the top 25 teams in the country at keeping opponents off the line and possessing the basketball. The Wolverines will certainly need to do both of these things if they want to have a chance at upsetting Clemson.

My thoughts on Clemson are a bit skewed. Statistically their resume is very sound and on paper they should be very good team. Unfortunately I watched probably the worst stretch of basketball that they played all year – the last 15 minutes of their overtime win over Seton Hall. The game was the epitome of ugly, with Clemson shooting 29% from the field, and left me thoroughly unimpressed – so much so that I was half asleep by the time the game ended. I’m not sure I have much leeway to criticize another team for their offensive woes, considering Michigan scored just 109 points and shot 31% over two games in Atlantic City.

At the end of the day, even that dismal display of basketball isn’t enough to convince me to pick Michigan, who will play at least five freshmen in their first true road game, to pull off the upset. I am hopeful that Michigan will rebound from their disappointment in Atlantic City and at least play a competitive game but I just don’t see how they can come home with a victory. Pomeroy says Clemson prevails by 10, 66-56, giving them a 86% chance at victory. I’ll go with Clemson by a score of 63-50.