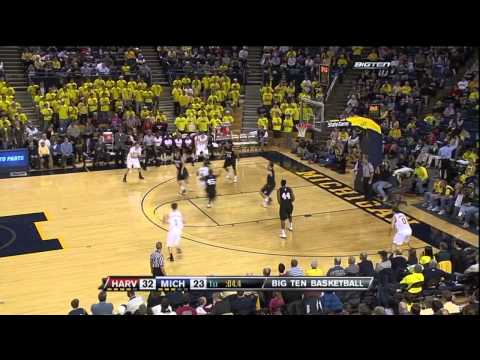 We’re introducing a new feature today that we’re going to keep going throughout the season: Five Key Plays, an in-depth look at five plays during the course of the game that changed momentum, started a run or otherwise had a significant impact on the game.

This feature also wouldn’t be possible without Josh Houchin, or MaizeNBlueJ, who captured the video and cut the clips to include with the post. Without further ado, here are the Five Key Plays from Michigan’s 65-62 win over Harvard yesterday, in chronological order:

This is just a really good, creative play by Darius. I think we can be reasonably confident in his ability to create his own shot, and he proved it yesterday. Darius was able to create his own scoring opportunities and take advantage of them against Harvard, especially when Michigan was having trouble scoring within the offense, and this is just one of those times. Darius crosses his man and makes a great play to the basket. Pulling up in the paint frees him from his defender and creates space enough to make a tougher-than-it-looks fadeaway jumper. This made the deficit at halftime seven points instead of nine, one of those important baskets going into halftime. Last season it felt like these were the backbreaking plays that Michigan gave up so often and rarely converted on their own.

Really impressive play all around for the Wolverines. Darius starts by getting the ball out on the fast break quickly and finding a very open Stu Douglass at around the free-throw line extended. Stu passes up the 3-pointer, pump-fakes and makes a strong move to the basket. He sees the rest of the Crimson aren’t quite back on defense and shovels a nice pass to Blake McLimans for the easy layup. Though Stu Douglass deserves props for his great shooting tonight, he contributed a whole lot more–he also recorded four rebounds, two assists and some solid defense along with this smart play that brought Michigan to within two points of Harvard while the Wolverines were clawing their way back early in the 2nd half. Also, finishing a good lay-in like was probably a confidence-booster for McLimans, who hasn’t been playing great this season.

At around the four-minute mark in the second half, Michigan was clinging to a one-point lead over Harvard and hadn’t scored for over two minutes. Darius brought the ball up the court and looked intent on finding Zack in the right corner. Zack eventually gets the ball in the post and somehow finds a wide-open Matt Vogrich clear across the court and makes a great pass over the defense to get him the ball. Vogrich knocks down the 3-pointer and makes a precarious one-point deficit a slightly more comfortable four-point cushion late in the game. Michigan wouldn’t relinquish that four-point lead until very late in the game, as they won by three.

Morgan has been working on this all season, according to John Beilein. Beilein said early in the year that Morgan was taking some of the first offensive fouls of his life, but after how many he took against Syracuse he looked like a seasoned vet. He continued to progress in that area yesterday against Harvard, taking (and flopping a little) a charge against Crimson big man Keith Wright, who had been giving the Wolverines trouble all game. This occurred with about two minutes left in the game and Michigan nursing as four-point lead. It was a great way to get Michigan the ball back and Morgan made it look easy.

Stu started with hitting a tough 3-pointer early in the second half, at around the 13:30 mark. Seemed unassuming enough. Then, he made another one less than a minute later. With a long two and another make from beyond the arc Stu’s second-half mastery was complete. He almost single-handedly led the Wolverines back from a seven-point halftime deficit to, by the time he was done scoring, a seven-point Michigan lead. His long-range makes came at exactly the right time and played a big part in building up a lead the Wolverines would hold onto for the remainder of the game. I think this can also solidify Stu’s role on this team as a shooter and can allow him to find a groove in that role. His purpose off the bench should be to shoot–though he can do many other things (pass, play good off-the-ball-defense), shooting is how he can help the team the most.