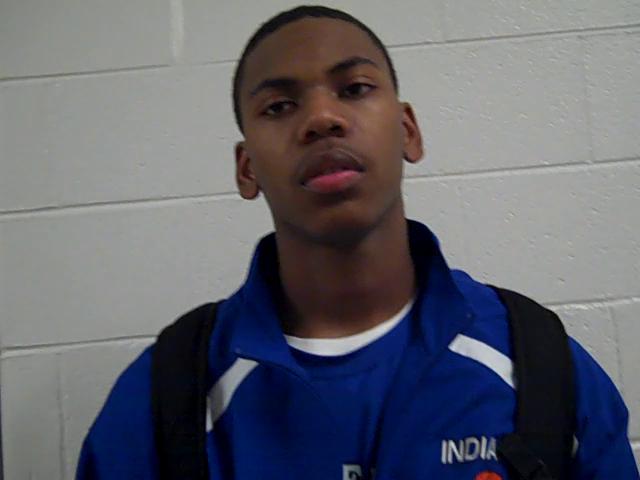 Joe Eberhardt is an Indiana high school basketball blogger and guest contributor to UM Hoops. You can follow him on twitter at @IndyHSHoops or read his blog, IndyHSHoops.com.

Here’s a video interview with Robinson after the loss:

You can find a full scouting report along with a number of pictures after the jump. Check back later this weekend for game footage. Strengths: Robinson did a great job of attacking the rim and drawing fouls off the bounce. The defenders matched up against him didn’t have the lateral quickness to keep up with him, and Robinson used this to his advantage. He shot 10-13 (77%) from the charity stripe, showing the ability to create opportunities for himself, and frustrate the opposing coaching staff by drawing fouls. Along with getting to the foul line, Robinson showed the ability to finish plays after contact, converting several “And 1” plays. With a 6’3 player guarding him, Robinson looked comfortable with his back to the basket, showing off a crisp spin move to his right on a couple occasions. He was able to exploit the mismatch in the post and create high percentage looks for himself down low. Robinson’s not built like a prototypical rebounder, but he used his length and athleticism to rebound the ball effectively, grabbing 6 rebounds, the second highest total in the game. He was also able to produce some second chance opportunities for himself by grabbing 3 offensive rebounds. Defensively he looked great, using his length and quickness to give opponents grief on the perimeter. Because of his length and athleticism Robinson is also able to alter and block shots against most competition.

Needs Improvement: Robinson didn’t have a great shooting night, as he shot 7-21 from the field. Early on in the game he forced the mid-range jump shot on several occasions, rather than attacking the basket. Robinson isn’t a bad shooter, but often settled for jump shots when Crown Point played zone defense. As a ball handler, Robinson is great with his right hand, but looks uncomfortable when the defense forces him left. Polishing up his ability to handle with his left hand and working on shooting consistency, are the two biggest areas to improve for Robinson.

Final Thoughts: This game showed a complete picture of Robinson’s game. While he struggled as a shooter, Robinson looked great attacking the rim and getting to the foul line. He’s a better shooter than what tonight would lead you to believe, but consistency is the name of the game. Robinson doesn’t have a lot of help at Lake Central and he will be asked to shoulder much of the load. He has two talented freshmen teammates in 6’7 Tyler Wideman and 5’9 Tye Wilburn, but Wideman battled foul trouble and Wilburn is out until the second semester with an injury. If those two are able to provide more help for Robinson, it should alleviate some pressure from him and allow him to have a little more freedom on the court. Robinson has a bright future, and as he continues to polish his game, he’ll become even better and more productive.