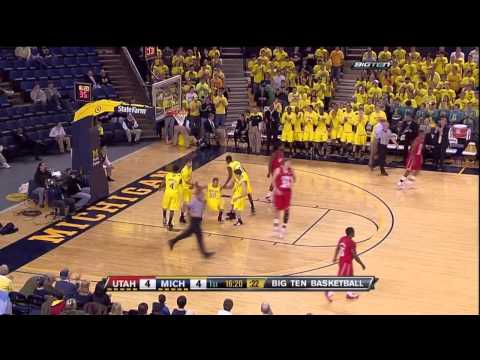 Michigan made a lot of great plays in its 75-64 win over Utah, which made choosing five pivotal ones pretty tough. But here they are, Five Key Plays from the game in chronological order.

Jordan Morgan continues to impress defensively in the post, especially when it comes to taking charges. The first of the two fouls was great timing on Morgan’s part — I guarantee this play comes from film study. Morgan waited for a shoulder dip from David Foster he knew was coming and took it. Tough, smart play by Morgan. The second play is a great illustration of how you can draw offensive fouls simply by being in the right spot and playing tough. Morgan was right where he needed to be to put himself in good position defensively, forcing Foster to (illegally) try to move him out of the way. Here’s what he had to say about the plays:

It’s just being smart, I guess. You have to anticipate what they’re going to do and just kind of use your head and outsmart them. He’s a bigger dude, obviously … so you got to try to outsmart him and outplay him.

Drawing these two fouls not only got the 7-3 Foster in early foul trouble, it made the Utes more hesitant to bring the ball inside. Not to mention these plays contributed significantly to Michigan being in the bonus at the 8-minute mark of the first half.

2) Jon Horford slams one home off the pick-and-roll

This was a great play by both Darius Morris and Horford. Horford got the attention for the dunk, and rightfully so, but Darius makes a a really nice play that he wouldn’t have made last year which just shows how far he’s come. What I really liked about this one is that the initial pick-and-roll wasn’t open so Jon and Darius both improvised. Jon went the other way with the pick and released real quickly to the hoop, which got him open enough for Darius to find him with a nice bounce pass. Obviously this play was a big momentum swing for the Wolverines as the crowd went absolutely nuts after the slam and didn’t let up the whole game. But I think the biggest impact from this play was the confidence boost it gave Horford as the game went on. He really took off after this play and had by far his best game to date. Side note: Horford, though he’s the smallest of the big men, sets the best picks. This wasn’t a great example, but tonight he set some really solid picks.

Credit Beilein on this one — this was a great set play coming out of halftime that worked to perfection. Darius brings the ball up the right side and Zack Novak starts the play in that corner with Evan Smotrycz on that side of the free throw line extended. Novak comes across the paint and sets a great pick on Morgan’s man. Darius gets the ball to Evan, who has rotated to the corner. Morgan, freed by Novak’s pick, does a great job of screening the help defender from the basket side and clearing space for himself to get the ball. Evan had an otherwise ho-hum night but makes a great pass on this play to Morgan, who finishes strong in the paint. This was a great way to start the 2nd half and honestly, Michigan needed all the points it could get in the second frame with Utah continuing to hit shots down the stretch. This is also a good example of how patient Michigan was on offense all game. This play took a little while to develop but everyone stuck with it and got to their spots.

4) Tim Hardaway Jr.’s eight straight points in the 2nd half

Tim Hardaway Jr. finally was able to get his offense going against Utah. He started the game off slowly with two fouls and four points at halftime, but really turned it on in the 2nd half and showed Michigan fans what he’s capable of. The run was touched off by that ridiculous dunk in the second half with Hardaway taking off from about the third hashmark to send it home. From there, Hardaway found the touch from deep, nailing two 3-pointers on back-to-back offensive possessions.  Hardaway on the 3-pointer from the corner with 11 minutes left in the 2nd half:

When D-Mo attacked (the basket), my guy, he helped off a little bit so I saw I had a little bit of room so I just … ignored the man and shot over him.

This play kind of fell apart, but it went a long way toward preserving the lead in the second half and, as John Beilein said after the game, keeping the Utes at bay long enough to win. Novak receives the ball in the corner from Stu Douglass. Novak drives to the lane and finds a cutting Darius, but Darius can’t hang onto the ball. As three defenders swarm Darius near the left block, he somehow finds Novak at the 3-point line. Novak is wide open with his man helping on Darius and drains the triple, making the Michigan lead 20 with a little over 10 minutes to go. Just seeing Zack drain one of these was nice after watching him air-mail an earlier attempt from deep and watching him struggle from beyond the arc this season. With all that he provides in other facets of the game (9 rebounds in this one), if he can knock down those open looks he can be a serious weapon on the offensive end as well.