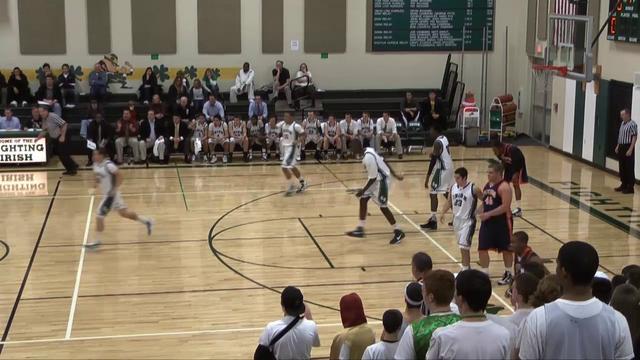 Full scouting report after the jump.

Flint Powers traveled down US-23 to Ann Arbor Friday night to face the Gabriel Richard Irish, a team ranked in the class B preseason top 10. JaVontae Hawkins had a slow start for Powers but showed flashes of brilliance as the game progressed. At one point he ripped down a strong rebound on the defensive end, took off down the floor, crossed a Richard defender over at midcourt, and hit a runner from about 15 feet. He began to score a little easier inside, but his outside game was struggling a bit. Hawkins was playing mostly at the 4 spot for Powers, so he was almost always inside or spread low on the wing. He only attempted a handful of long shots and didn’t connect on any of them. Most of his takes were on post-ups under the hoop or drives from the wing.

Hawkins played a very strong second half, spending a ton of time at the free throw line. As Powers found themselves in the bonus early, Hawkins continued to attack and he earned his trips to the stripe. He was driving at will, but seemed to have trouble going from drawing contact to putting a good shot towards the basket. As he gets stronger and more used to the contact inside, he’ll be able to round out that part of his game. He was extremely effective from the line, however, shooting 7-10.

Powers pulled away in the fourth, and won 63-49. Hawkins scored 19, Zach Adams 17, and Pierre Brackett 13. It was another solid win for Powers –  Hawkins had a slow first quarter, started to assert himself in the second, and frankly took over the game in the second half, with Powers looking for him on most of their possessions down the stretch.

Hawkins looked very nice once he got rolling. His game seemed more inside-oriented yesterday, but he was willing and able to take that role. He showed poise and strength taking it inside in the second half, picking up fouls and draining the free throws. He looked strong in transition, and showed the hops and speed that you want to see from potential Big Ten athletes. He hustled on defense, breaking up a few passes and putting himself in a position to take hits and be physical. He took an extremely hard foul on a breakaway, and hit the court hard, but got right back up and nailed the free throws. It might not have been Hawkins’ best game but Hawkins demonstrated why he holds a Michigan offer.