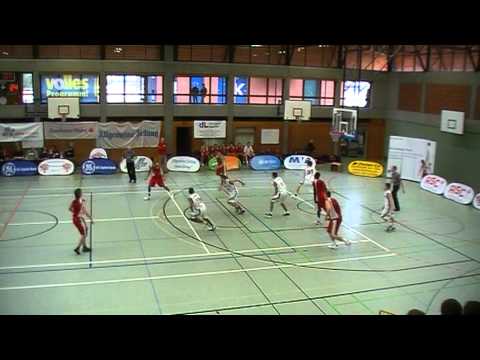 According to European Prospects.com’s Christophe Ney, Michigan head coach John Beilein recently visited German guard Patrick Heckmann. Heckmann is one of the top guards in Germany and is also receiving interest from San Diego and Maryland. He is a 6-foot-6 guard and was born on February 27th, 1992, which would likely make him a member of the class of 2011 but could fall into the class of 2012. He has also reportedly attained a score on his SAT that should allow him to qualify with the NCAA, a hurdle that Robin Benzing missed by one question. He recently agreed to play with TV Langen — the same club that former WVU player Johannes Herber and former Michigan commit Robin Benzing originated from — but did not sign any professional contract, making him eligible to play in college. Here’s a recent interview with Heckmann that ranges a number of issues, including Heckmann’s desire to play college ball. Here are a couple quick video clips including a half court buzzer beater, alley-oop dunk, and a big block (not 100% sure this is him). We’ll have more on Heckmann in the coming days and hours, but for now here are a couple scouting reports.

Ney had this to say about Heckmann’s game after seeing him play at the U18 European Championships:

Despite having some serious ups and downs during the tournament, Patrick Heckmann was one of the rare satisfactions for the German team. Being able to play all positions from 1-3, Heckmann was mostly used as a SF but excelled when playing the PG in the decisive minutes of the game I scouted. He can create out of his drives either for himself or his team mates and his athletic abilities give him the possibility to wait until he decides what he does when attacking the basket. The German player looked also a bit better on the defensive end. He needs to get more consistent in his effort and his new role with the German 3rd league team of TV Langen will certainly help him in this way.

Here’s another recent report from April:

Offensively, his arsenal is however very large as Heckmann can play every position from 1 to 3. His shot release is maybe a bit slow and he is not the most accurate from behind the arc, he excels when he drives to the basket where he can go until the rim but also create for his team mates. His athletic abilities allow him to finish in traffic high of the glass or with good hang-time and his large body helps him to be protected against losing his balance. His nice wingspan gives him possibilities to overcome his lack of lateral speed on defense but he showed his limits in this area during the tournament.