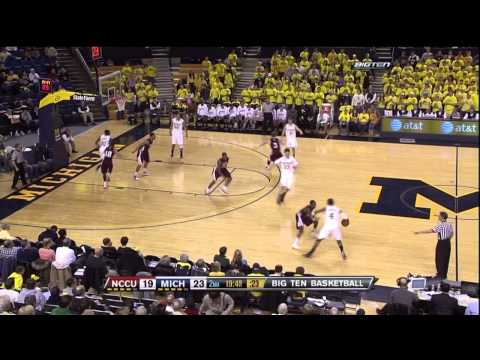 David Merritt is a former Michigan basketball captain and the founder of I Miss You, Inc..

I’ll start this post by saying that I have no answers or suggestions. This post is merely an observation concerning something I’m fascinated by: The fine line of 3-point shooting.

After watching Michigan’s offense struggle in the first half against North Carolina Central, this fascination arose again. The Wolverines were struggling on offense, and with NCC going zone shot 2 of 16 from 3 point land. That’s 12.5%. If you’re a numbers guy, you would think the solution is simple: stop shooting so many 3’s. It’s not so simple.

If you go back and look at the tape, you will find that Michigan’s offense was indeed working properly. Despite two or three bad shots, most of Michigan’s looks from 3 point land were good looks in the first half — they just weren’t falling. So what do you do when you aren’t executing what you’re known for…what you practice so hard at… and what a number of guys on your team are capable of executing at a high rate?

This is where the difficulty of coaching comes into play. Anybody who thinks he/she could easily do Coach Beilein’s job, think again.

And it’s not just about coaching. If you’re a shooter, shouldn’t you keep shooting? The moment you think twice about taking an open three is when your chances of making the shot plummet. It’s important to note that I’m not talking about contested threes. I believe if you’re struggling from deep, you should definitely be more selective with the quality of your shots. But what do you do when you aren’t hitting the wide open ones?

You have to take them. This is what you do. You’re a shooter. You’ve got to trust it. If you’re not open, pass it or drive it in the lane and get somebody else open. But if you’re open, shoot it. Trust it. Make it.

Michigan shot 6 of 13 from three in the second half – tied for its third best half of the year. What would you do?

Let’s look at this example. Is Evan Smotrycz’s decision to drive the ball here the right play?

On one hand, Evan didn’t seem too comfortable shooting this particular shot. As a result, he drove in to the lane and attacked the basket. Good job! He got himself to the line and made a move he was comfortable with. However, you need him to be comfortable shooting that shot. You need for Evan to get his swagger back. So you want him to shoot the freaking ball. Turns out, this move really helped Evan regain that swagger. He hit two of his next three shots (including a 3) and had two assists. The fine line is obvious here, and there’s no perfect answer, but you can see how important it can be to the balance of any game.

Make sure you check out IMU’s Holiday Sale. At least 30% OFF everything and Free Shipping on orders of $75 or more. Just enter coupon code, FREESHIPPING, at checkout.

David Merritt is a former Michigan basketball captain and played on the 2008-2009 NCAA Tournament Team. David is also the founder of I Miss You, Inc. & The IMU Brand, an apparel company focused on offering high quality product while spreading happiness and bettering communities.

You can reach Merritt in a variety of ways namely through his twitter account, blog, or e-mail.