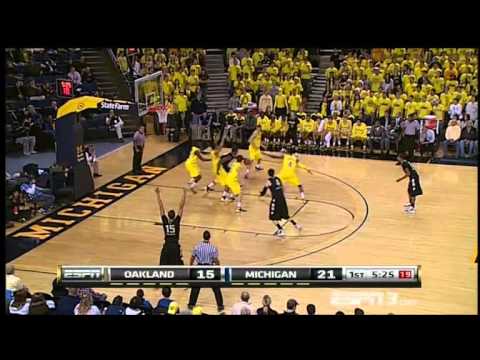 We thought that we might not have the Five Key Plays after this one since it was broadcast on ESPN3 but video-guru Josh Houchin came through in the clutch and provided the video clips. They are in standard def for this one but that is certainly better than nothing at all. Without further ado, here are five key plays from Michigan’s 69-51 win over Oakland.

Michigan threw an array of different double team looks at Benson, but no matter what they tried, it always seemed to work. The Wolverines generally brought the double team from either the baseline or the top of the key, but here we have four different clips of different looks. There are a couple constants throughout. First, Michigan was physical with Benson and bumped him enough to make him uncomfortable and even force him to retaliate. This was crucial because the last thing Michigan wanted was to allow Benson to set himself, take his time and methodically go to work on the block. Sometimes Michigan would preemptively double Benson, having Novak cheat in so far on defense that he’d be covering him before the ball was even thrown to the post. Most times, the double would come immediately after Benson caught the ball. Benson was never comfortable passing out of the double team and eventually he knew the double team was coming which caused him to try to force things.

2) Michigan opens the second half with a 7-0 run, extending its lead to 15

The second half of the Oakland game started the exact same way as the second half against Utah: John Beilein ran the same play to get Jordan Morgan an open look underneath, it was just ran to the opposite side of the court. Once again, Tim Hardaway Jr. and Zack Novak both set off-ball screens for Morgan, which frees the big man up to receive a nice pass from Evan Smotrycz, which Morgan converts. On the next play, it’s Smotrycz’s turn as he hits a deep 3-pointer with a man in his grill. On the last play of Michigan’s 7-0 run to start the half, Darius Morris deftly dribbles around the defense and pulls up for a shot at the free-throw line that rattles in. Michigan really found its groove offensively at that point and Oakland never recovered.

3) Tim Hardaway Jr.’s heats up quickly in the second half

After going the entire first half without scoring, and missing some wide-open looks from three along the way, Tim Hardaway Jr. found his way in the second half. The freshman kicked things off with a guarded 3-pointer from the corner around the 14-minute mark in the second half, and then converted a really nice and-1 about a minute later. Hardaway scored 10 points, all in the second half, and was a big reason the Wolverines were able to keep Oakland at bay in the second frame. The and-1 was one of Michigan’s most impressive plays of the night, coming off the fast break. Stu Douglass fought for the rebound then made a tremendous outlet pass to Darius Morris, who in turn made a great pass to Tim who finished with the contact. For now, Hardaway needs to work on his consistency, but it was good to see him get it going in the second half.

Zack didn’t have the best offensive day but one play stood out — with about 12:30 remaining in the game Novak takes the ball all the way to the basket and goes right at Keith Benson. As the season’s progressed, we’ve seen Darius Morris do more and more dribbling, kind of feeling his way inside the 3-point line, taking it back out, etc. As he does this, because of the scoring threat he presents, he’s able to draw defenders left and right, and that’s what he does here. As he takes the ball to around the free throw line, Will Hudson helps off his man, Novak. Darius gives Novak the ball at the top of the key and the junior sees nothing but open court in between him and the basket. Until, of course, Keith Benson comes to help. No problem for Novak, who simply elevates and puts in the layup right over Benson. Benson had swatted Novak earlier in the game, and Michigan looked noticeably intimidated around the hoop during the game, but in this case it was great to see Novak take the ball all the way to the hoop.

5) Darius Morris’ assist to Stu Douglass from half court

Thought we missed this one, didn’t you? Don’t worry we didn’t miss the one SportsCenter highlight-caliber play of the game. This was just an amazing play by Darius. To be able to see that play happening from where he was relative to where Stu was takes some incredible vision. Darius and Stu were the primary ballhandlers near the end of the game when Oakland instituted the press and subsequent trap once Michigan crossed half-court, and the two of them had little difficulty holding onto the ball. Here, Darius simply keeps the ball away from the defender and then whips a laser-accurate pass to Stu out of nowhere for the bucket.