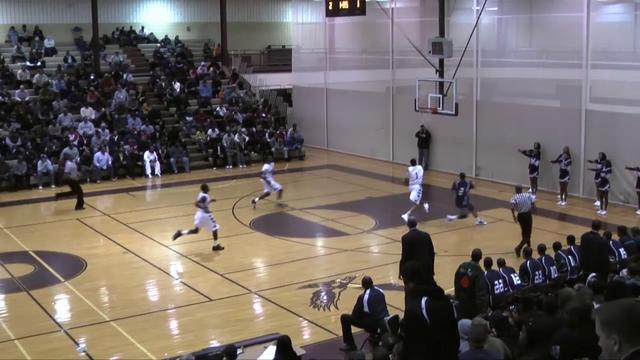 Last night Carlton Brundidge and the Southfield Blue Jays went up against Brandan Kearney and the Southeastern Jungaleers in a tournament held at Romulus high school. Dylan and I made the trip to watch the Michigan and Michigan State commits go at it. The game also featured big man and Dayton commit Percy Gibson for Southeastern. Brundidge struggled, as Kearney and Gibson stole the show, but here’s a highlight film of notable plays from Brundidge and Kearney.

Scouting and game report after the jump.

The game kicked off very much in Southfield’s favor. The Blue Jays were running the Jungaleers out of the gym and built a quick double-digit lead in the first quarter. Brundidge looked very impressive in the early going, while Kearney struggled. But this didn’t last long. In the second quarter, Southeastern went to a 1-3-1 trap that immediately swung the game in the Jungaleers’ favor. The Jays couldn’t hold on to the ball because they just weren’t moving it fast enough, allowing Southeastern’s defenders, specifically the incredibly long and quick Kearney, to double-team the ball and clog passing lanes. This lead to transition buckets fro Southeastern, who rapidly closed the gap and, by the end of the third quarter, had built a sizeable lead of their own. Southfield simply couldn’t get anything going against Southeastern’s zone and the final score was 73-56, Southeastern.