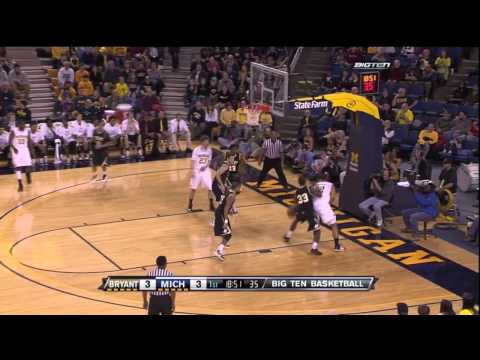 Bryant came out of the gate hitting everything from deep, and in the early part of the game it was up to Michigan to keep up. Evan Smotrycz was a big reason why the Wolverines were able to keep up in the early going. The freshman tallied Michigan’s first six points on the two 3-pointers featured in the video above. The second triple is interesting because it highlights something Darius Morris was able to do all night against the 2-3 zone Bryant threw at Michigan all game: Darius was able to get into the lane with relative ease, draw a defender or two and find the open shooter on the perimeter. It was how Michigan ended up with so many open 3-pointers, and the Wolverines were able to knock them down. As John Beilein said after the game, the 2-3 was a good strategy if Michigan was missing shots, but they weren’t.

This was just a great sequence here early in the first half and one that points to Horford’s rapid progress the past few games. Horford only got 11 minutes against Bryant, and as Dylan said in his recap, it’s going to be tough to keep him off the court if he keeps producing like he has been. Here, we see Horford play some solid post defense and get down the court quickly. He and Darius then run a perfectly-executed pick-and-roll from the top of the key with Darius finding Horford at the right time and Horford finishing strong in the post for the and-1. Horford is playing the best out of the three bigs right now. Jordan Morgan continues to play well, but it seems like Horford gives the offense more options and he’s rebounding really well. Look for his minutes to go up as his production does the same.

3) Backdoor pass from Matt Vogrich to Smotrycz for a layup

This is a really nice play late in the first half by Smotrycz, who reads the screen perfectly. This was a great look from Vogrich, but Smotrycz made Matt’s job pretty easy. Evan faked to the perimeter and made a really good, hard backdoor cut to the basket to free himself from his defender. Jon Horford was involved as well, as his pick went toward selling Evan’s fake to the 3-point line. One of the most obvious improvement for all the bigs have been their ability to move without the ball. Morgan got a few good looks off a play that’s been featured quite a bit in Five Key Plays against Bryant and here Evan does a great job getting himself open with a hard backdoor cut. You have to cut like you mean it if you want to get open and Michigan’s big men are doing that.

There wasn’t much fundamentally sound about this play. In fact, Zack Novak was reasonably open in the corner. But this was a heck of a finish on the fast break by Darius late in the game. He has been great running the fast break recently and even though the Wolverines doesn’t get a lot of opportunities to run he certainly takes advantage whenever they do. Chalk this play up as one of many Darius Morris highlights from this game.

5) Darius Morris 3-pointer as the shot clock winds down

This is another instance of Darius just making a play when Michigan needs one. Darius really had a heck of a game, but this highlights what may have been most impressive about his day: 3-point shooting. Darius was 4-for-6 from beyond the arc and looked exceedingly confident shooting the ball from long range. He is undoubtedly the player Michigan goes to when the shot clock is running down. The Wolverines expect him to make plays in tough spots and he hasn’t disappointed. John Beilein was asked about Darius taking the place of Manny Harris as the guy on the team who can create his own shots, and Beilein referenced the work Darius has done with Lavall Jordan to improve in that area. What is impressive about this play, besides the shot, was how Darius was able to create the smallest space between he and his defender. That space made all the difference as Darius was able to get the shot off and watch it drop through the net. Darius on the shot:

I just looked up at the shot clock and realized we didn’t have a lot of time, so I put the shot up and it went in.