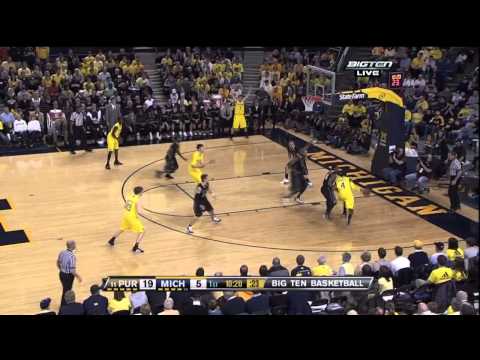 Here’s a breakdown of five important, game-changing or otherwise interesting plays and sequences from Michigan’s 80-57 loss to Purdue at Crisler Arena.

At the 11-minute mark in the first half, Michigan appeared dead in the water. The Wolverines were down 19-3. They couldn’t get anything going offensively. Purdue was making everything. Then, Stu Douglass put on the cape and went on his own 8-2 run, scoring on a long two and then two 3-pointers. The first shot came very early in the possession, with Stu creating a little bit of space for himself in order to make room to get off a mid-range shot. On the next possession, Darius Morris made a nice play, finding Stu in the corner after drawing defenders on his drive. On the last 3-pointer, Stu simply caught Purdue before the Boilermakers could get set on defense and made them pay. If Stu can get comfortable creating space for himself, he could emerge as a major weapon, especially with his markedly improved shooting from beyond the arc. Stu’s run pushed Michigan into double-digits and was the catalyst for the Wolverines’ big first-half comeback.

On these plays Smotrycz picks up right where Stu left off in the first half. Evan contributed six major points to Michigan’s first-half run to get the Wolverines back in the game. His first 3-pointer, with almost seven minutes left, almost immediately followed Stu’s latest 3. Stu, showing a lot of confidence with the ball in his hands at this point, drove the lane, drew defenders and kicked out to an open Smotrycz, who nailed the shot. Great find by Stu and a nice shot from Evan. Almost two minutes later, Stu drives to the hoop again and finds Matt Vogrich at the top of the key, who quickly gets the ball to Evan, who knocks down his second 3-pointer of the night. That possession showed nice ball movement by Michigan, though Stu drove to the basket a bit haphazardly. By the time Evan’s second triple fell through the net, Michigan had turned a 19-3 deficit into a two-point game.

Michigan had great difficulty in the final minutes of the first half last season. Today, those ugly problems reared their head yet again. Just as Michigan grabbed a 1 point lead after an emotional comeback, they let a chunk of their hard work, and momentum slip away in the final minute. It started with a silly foul by Jon Horford (which the BTN cameras missed) and was followed up by some awful offensive possessions that ended with Darius throwing up out of control shots in the lane. It could have been even worse, as Michigan took a shot with 15 seconds on the clock rather than wait for the last shot. Purdue obviously outplayed Michigan by a significant margin in the second half, but this stretch might have been the most costly.

4) Purdue’s 20-7 run midway through the second half

Until this run, Michigan was very much in the game. The Wolverines were down just five and had just scored on a layup by Jordan Morgan. The game seemed like it could go either way, and Purdue made sure it went its way. It all started with a 3-pointer from E’Twaun Moore, who was given just a little too much room by Tim Hardaway Jr. Another open 3-pointer and a mid-range jumper later and Purdue was off to the races. These three plays signify the beginning of Purdue claiming the game.

Smith kind of killed Michigan all game long (he finished with 17 points) but these two 3-pointers in the second half were absolute daggers and a great example of how Michigan’s defense consistently left Smith open on the perimeter. Not only that, but they were both pretty wide-open, especially considering he was the one guy on Purdue’s team you didn’t want to leave open on the perimeter. Smith’s first triple kicked off Purdue’s 8-0 run to start the second half. Lewis Jackson got by Hardaway and Zack Novak helped, leaving Smith, his man, wide open in the corner. The second 3-pointer came at the 7:54 mark, right when Michigan was desperately hanging onto a single-digit deficit. Smith’s triple made it 60-49 and Michigan never recovered. Michigan was playing zone on this play, and there appeared to be some confusion between Hardaway and Jordan Morgan on who would cover the corner, and Smith was left wide open for the long-range shot.