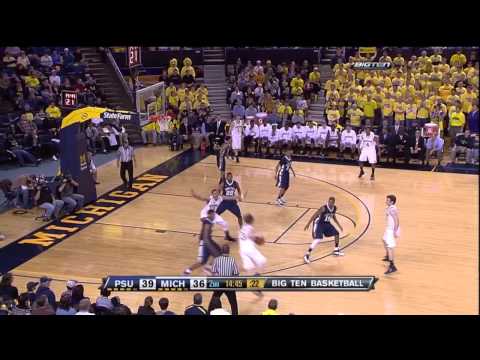 Sorry they are a bit late. Both Joe and Josh were at the Gator Bowl which forces me to step in and write my first Five Key plays feature. Luckily there were plenty to choose from as Michigan made a number of clutch plays down the stretch. Matt Vogrich and Zack Novak star in four of the videos although Darius Morris assisted four of the seven made baskets featured scored a fifth.

Matt Vogrich three at 14:32 in the second half

This possession was so critical because of how bad Michigan’s previous several possessions had been: a careless Hardaway turnover, a bad shot from Darius Morris, another careless turnover from Evan Smotrycz, and a missed shot by Jordan Morgan. Michigan was coming out of a timeout and had failed to capitalize on five straight missed Penn State jumpshots. The Wolverines responded with a patient possession that was clearly designed to get Vogrich a quality look. Penn State defended the first option very well, as David Jackson fought through Morgan’s screen relatively easily, but the Nittany Lions were so worried about Morgan’s roll to the basket that they left Vogrich wide open on the pick and roll as his man ducked into the post to help cover Morgan rolling to the basket.

The first is a corner three where Morris’ penetration collapses the defense and leaves Novak inexplicably wide open. The second two baskets are even more impressive because they aren’t something that you see out of Novak every day. Novak was running the floor hard, harder than we’ve seen Michigan run this season, and instead of drifting out to the three point line he went all the way to the basket. Michigan’s guards, both Douglass and Morris, found him and rewarded him for his hustle. Picking up points like this in transition is a great way to get a little bit of confidence flowing and the pass from Darius on the final layup was just a beauty as he snapped it off 40 feet from the basket.

Darius Morris finishes with the foul

The leap in Morris’ confidence is evident when the opposing team doesn’t have a true shot blocking threat. You can see here that he knows there is no shot blocker in the lane and decides to attack the defender, puts his shoulder down and finishes with the contact. These are baskets that you need from your point guard and Morris continues to play the pick-and-roll very well. Morris still has to figure out when to do everything on his own and when to get others involved, but this is a prime example of creating your own offense efficiently at the right time.

We’ve all seen better pump fakes and the layup wasn’t necessarily graceful or aesthetically pleasing, but when all was said and done it might have been the most important Michigan basket of the game. Vogrich consistently took the ball to the rack in high school and while he has been limited at this level, this is an element of his game that will continue to develop over the next two and a half years. With his shooting ability and size, you can see how easy it is to make something happen with the simplest of pump fakes. Was it a charge? Maybe, but you have to be aggressive and force the officials to make that call.

Zack Novak hits a three to put Michigan ahead by four with 1:45 remaining

I’m not really sure why Billy Oliver is guarding Novak, presumably because Penn State wanted David Jackson defending the pick and roll, but it didn’t work. Novak recognizes that Oliver went under the subtle screen that Morgan sets and he simply fades to the three point line where he has a wide open three point look. If it doesn’t go in you might be wondering why Michigan takes a three with 25 seconds left on the shot clock up a point with under 2 minutes to play, but it was a wide open look and capped off Novak’s best offensive performance of the season.