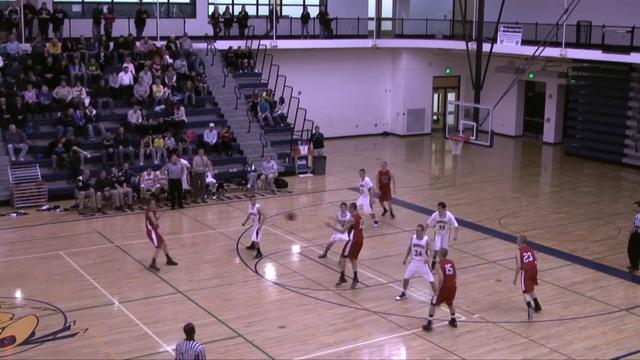 I made the short trip down Ann Arbor-Saline road to Saline High School tonight to watch one of the area’s best young players — Jackson Lamb, a 6-foot-7 2013 recruit out of Bedford High School. Bedford won the game and Lamb had 26 points, here are some highlights:

You can find a full scouting report and video interview of Lamb discussing his recruitment after the jump.


Strengths: Lamb’s game is very developed for a 2013 prospect. He was strong under the basket with the ball. Good but not great on the offensive glass and very good on the defensive glass. He showed off some versatility, attacking the rim from the perimeter and also hitting a long jumper. But it was clear his home was in the lane. He looked very comfortable, executing some nice spin moves and great touch around the basket. He is very quick for his size and his drop-step looked polished. His length is great and he does a good job of using it to his advantage and keeping the ball high in the post.

Needs to improve: Lamb wasn’t great from the free throw line which is a problem given how often he’s fouled in the post. I think he could be better rebounding the ball on the offensive end. He did grab a few in this game but it seemed like he could dominate. He didn’t have a hook shot from what I can tell but there’s plenty of time to refine his post game. He also wasn’t playing against very strong competition.

Final thoughts: I was very impressed with nearly everything I saw from Jackson Lamb tonight. He is very athletic, quick and coordinated. He’ll only get better, but he’s really good right now. His touch in the post is great and his versatility was surprising — he even showed off some handle at times. His motor was great as well. This is clearly a kid with a ton of potential and it’s easy to see why so many Big Ten schools are after him early.