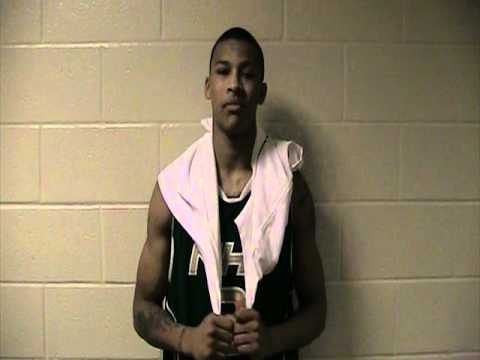 Trey Burke continues to be productive this season, he’s now averaging 24 points, 6 assists, and three steals per game while shooting 66% from the floor, 52% from three (eFG% of 73%).

Northland is the #3 team in OHSAA Division I and over the weekend they picked up a big win over a talented Rice team from New York.  Burke finished with 22 points on 9 of 18 (2-4 3pt) shooting with three assists and six turnovers in the win. NBE Basketball filed this report ($):

Trey was nearly unstoppable for much of the game with the ball in his hands. He connected on off-the-dribble jumpers with such ease, and he had no problem driving on his man and finishing from inside the paint. Burke really impressed the crowd when he dropped a step-back, off-the-dribble three-pointer with just two seconds on the clock before halftime, giving his team a 27-25 lead at the break. Burke also brought a great assist game, and strong in-the-face defense to the court Saturday morning. He dropped a few dimes, including a gorgeous pass, driving to the lane, finding his big man through a double-team, who then finished with an easy layup. The one knock on Burke was the fact that he was careless with the ball on several key possessions for Northland in the second half of the game. Southfield went 2-0 this week with wins over Harrison, 71-44, and Clarkston, 63-60. Brundidge had 21 points and 8 rebounds in the win over Clarkson. Brundidge was profiled in the Free Press by Mick McCabe. Robinson had a game high 17 points, including six in the final two minutes, to give Lake Central a win over Michigan City. Robinson was double and “even triple teamed” for a majority of the game. Over the weekend, Robinson had 24 points on 9 of 11 shooting vin a loss to La Porte.

A seemingly random outsider that was at the game provided this report:

At one point in transition he actually tried to dunk over another player. He came away holding his eye, and he was up so high I wondered if he hit his head on the rim. He really is as good as I had heard he was. I am not a good scout for high school talent though. I will leave that up to the experts. What I will say is that Glenn is a player that can force the opponents to adjust to him. In high school I think that is all you can ask of a player.

Stauskas had a game high 20 points in a 67-56 win over St. Andrews as he “shot jumpers and took it strong to the goal with equal aplomb.”

In a 68-58 win over Milton, Stauskas had 18 points and six rebounds. The offense was left “largely in the hands of Stauskas, who was 6-for-6 from the free throw line and hit two 3-pointers.”

Pershing guard Sherron Dorsey-Walker had 13 points, five rebounds, and four assists, in a loss to Southeastern. Sam, a commenter on this site, posted a detailed scouting report but here are some of the highlights:

First off, Sherron Dorsey-Walker is a legit 6-4 with very long arms but still awfully skinny. If he had been hitting his shots last night, it could have been a completely different game. He clearly has a good stroke, he was simply unable to get it to go down in the rowdy environment. He does a great job getting to the rack and drawing contact and is a wonderful passer, but has a ways to go on his strength and shot selection. He still has a year and a half of high school ball and a summer of AAU to work on his game. I fully expect him to be a contributor on the high major level after a couple years of work with a good staff of coaches and strength and conditioning workouts. Hare almost had a triple double in a loss to Saginaw with 15 points, 10 rebounds, and eight blocks. He also had 10 points in a win over Bay City Western, who was playing without Matt Costello.