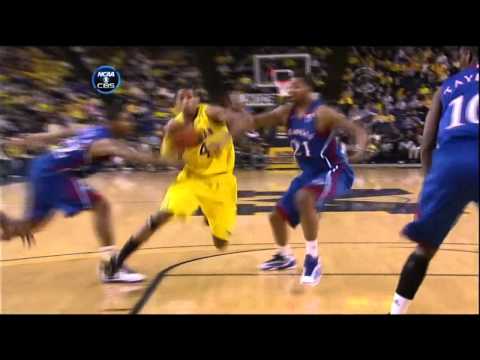 There were plenty of big plays and possessions in this one  so coming up with just five was tough. In the comments be sure to let us know which plays you thought were key if they’re not included here.

This is a good example of two great plays on opposite ends of the court. People may complain about Vogrich, and he didn’t do much in this game offensively, but he is aggressive on the glass, aggressive in his role in the zone, and he knocks down 3-pointers with relative regularity. This defensive play is all effort and knowing where you’re supposed to be. He made a great play on the ball and kept it inbounds. On the other end, not much was opening up so Darius decided to take it himself. He saw an opening in the lane and made a very tough shot in traffic, something he’s 100 percent better at this year than last year. This series came at the end of the first half and cut the Kansas lead to seven going into the break, allowing Michigan to stay within striking distance.

This was just another example of Darius creating his own look and knocking down a tough shot. It just happened to come at the end of regulation to tie the game with Kansas for the first time since the opening tip. I would bet Darius’ original plan was trying to draw defenders and kick out to an open shooter. But Kansas stayed at home and he had to come up with something and he did. We’ve learned this year that Darius doesn’t need much space to get off a shot, and here he creates just enough space fading away to get it off. Of course, the timing couldn’t have been better on this play — it tied the game and left Kansas with an opportunity to win it, but Michigan played great defense on the final possession and forced overtime.

3) Tim Hardaway Jr. scores 10 points in the second half

Cheating? Maybe a little bit. But Hardaway’s play in the second half no doubt played a huge role in lifting the Wolverines to overtime. Tim remained focused and aggressive all game, which is something fans have been looking for. He certainly had his fair share of misses (he went 5-19 from the field) but he stayed positive and continued to take it to Kansas. The two plays that stood out to me in this montage was a) when he noticed Kansas players were slow getting back and took the ball to the rack on the fast break and b) when he took matters into his own hands against Josh Selby and got to the line. The first play was a great example of what happens when you stay alert, aggressive and fearless. The second was a good move and also showed us we might be able to count on Hardaway to create his own offense sooner than it first appeared this season. Beilein talked all offseason about Tim’s ability to do that, and if he can that takes some pressure off Darius in that regard.

Boy, Crisler was rocking a la Duke in 2008 after this one. Michigan entered overtime with all the momentum and after this make it appeared they would be able to ride that momentum to a victory. This was a great shot by Zack early in the shot clock after Darius forced the ball up the court quickly. Darius almost hands him the ball and Zack let fly from NBA range and beyond. Zack has struggled a bit shooting the ball this season and it was nice to watch him find the touch in such a big moment, especially during a game in which he played a lot of forward. On defense, despite his extreme size disadvantage, Zack played great and grabbed 11 rebounds, which led the team.

5) 3-pointers from Markief Morris and Tyrel Reed in overtime

We had to give at least one play to the team that actually won the game. These two 3-pointers pretty much sealed Michigan’s fate in overtime as Kansas just proved too tough down the stretch. The first 3-pointer put a damper on the place after it was still jumping from Zack’s 3-pointer on the last possession and Reed’s triple made it a 6-point game after Zack missed a 3 on the other end. Morris’s long-range bomb just highlighted how insanely talented both he and his brother are, and any time you have a center who can step out and hit 3’s while still playing as big as he did down low, that’s tough to stop. Tyrel Reed’s make was one of only two on the night for him, but the guy can really shoot. You absolutely can’t leave him open on the perimeter, but he was quite deep on that shot.