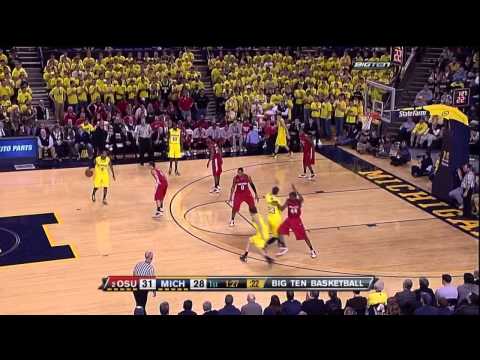 1) 3-pointer by Tim Hardaway Jr. at the end of the first half

It may not have been pretty, but Michigan exhibits great patience versus Ohio State’s zone on this play. Darius Morris was left with the ball at the end of the shot clock and had to make something happen. Here, he has the attention of essentially three Ohio State players: Jared Sullinger, David Lighty and Aaron Craft. His goal is to force the zone to collapse and kick out to a shooter and that’s what he does. He makes a slight move to the post and draws Lighty, leaving Hardaway open for the triple. Hardaway banks it in and just like that breaks an almost 2-minute scoring drought and ties the game. This shot, along with Evan Smotrycz’s 3-pointer, allowed Michigan to finish the half strong and remain in striking distance down just one point.

2) Aaron Craft 3-pointer in second half

This one was a killer. John Beilein has been stressing all season the importance of every possession and knowing the importance of each play, and this was one Michigan let slip defensively. To be fair, Ohio State does a great job moving the ball against Michigan’s 1-3-1, as they did all game. The way to beat the zone is by moving the ball quickly and making perimeter shots, and that’s exactly what the Buckeyes did here. Ohio State’s experience and ball handling eventually forced Beilein to go away from the zone and play mostly man. Here, Ohio State keeps the ball on the perimeter until David Lighty saw that Michigan was on its heels and was able to penetrate the defense and kick the ball out to Craft, who knocked down the 3-pointer. This shot pushed the deficit into double digits and was a real backbreaker almost halfway through the second half. The Wolverines just weren’t quick enough on their defensive rotation and gave up an open triple.

3) Tim Hardaway 3-pointer from the corner

This was another timely shot for Hardaway, and a good example of when Michigan was able to catch Ohio State’s defense off balance for a good look. Darius didn’t get the assist on this one, but he’s the one who created the play. Ohio State is playing man, with William Buford guarding Hardaway. Craft is on Darius, but when Smotrycz sets a pick for Morris, Smotrycz’s man (Dallas Lauderdale) extends to Darius instead of fight through the screen, leaving Smotrycz open. When Darius realizes both Lauderdale and Craft are on him, he gets the ball to Evan. Buford helps on Smotrycz but Smotrycz makes the heads up play and makes the quick extra pass to the corner where Hardaway is wide open. Hardaway buried the shot, which cut the Ohio State lead to six with seven minutes to play and re-energized the crowd.

4) Zack Novak 3-pointer at the top of the key

This was another really nice play by Darius as he takes advantage of Lauderdale switching onto him once again. Ohio State is still in man-to-man, with Craft on Darius, Lauderdale on Jordan Morgan and Lighty on Novak. Darius receives the ball from Morgan at the top of the key and Morgan sets a pick on Craft. Lauderdale once again extends to Darius, leaving Morgan open in the post but Darius unable to get him the ball because of Lauderdale’s length. Darius was unable to get the ball to Morgan, but when Lighty was forced to help on Morgan because Lauderdale was still preoccupied with Darius, Zack was left wide open at the top of the key. Darius Makes a great pass to find him and Zack knocked down the shot. The triple cut Ohio State’s lead to 6 once again and kept Michigan’s hope alive.

Officiating is one of John Gasaway’s dullest topics for a college hoops blog but, regardless of what you think of the call, this was one of the most important plays of the game. The play wasn’t too eventful as David Lighty gets open off of a nice down screen from Dallas Lauderdale and penetrates Michigan’s defense before Smotrycz slides in and provides some help. Jim Jackson wasn’t a fan of the call and I can’t say I was either. Most of all I’d love to know what went through the officials head as he made it, the pause and hesitation was unlike anything I’ve ever seen. This call came with under a minute left in the game and Michigan down three. If Michigan gets a stop they have the ball in a one possession game. Instead the play results in a pair of free throws which buried, making the deficit five points. Michigan had a chance to recover on the next possession after Novak was fouled on a three point shot, but he missed a free throw and Michigan was never able to bring the game closer than two points.