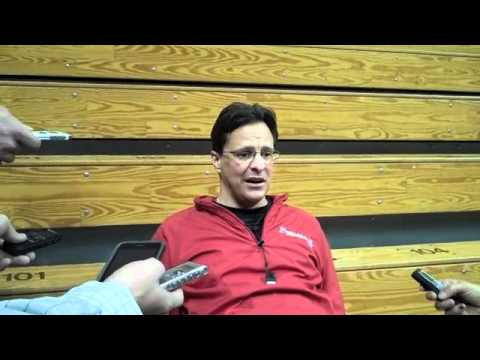 After coasting to a 10-2 start, Michigan is starting to feel the burn of conference play. The Wolverines have trudged along to a 1-4 record over the last five games with the four losses against teams with a Pomeroy ranking in the top 15. Regardless of who was on the schedule, a 1-4 slump is still a 1-4 slump and this team is desperately treading water in need of a win. The Wolverines will travel to Bloomington, where they’ve won just three times over the last 25 years, in search of that second Big Ten victory.

The good news for Michigan fans is that Indiana is in even worse shape. The Hoosiers appeared to be on the right track with a 9-2 start but have lost six straight games over the past three weeks. The common denominator during the losing streak has been terrible defense. Indiana has surrendered a staggering 1.20 points per possession as opponents ranging from solid to exceptional have carved up the Hoosier defense.

The root of Indiana’s defensive futility has been its inability to keep opponents off of the free throw line. Fouls have been a problem for all of Tom Crean’s Indiana teams but the scary thing for Hoosier fans is that the problem continues to worsen rather than improve. This year, Indiana is allowing opponents to attempt over half as many free throws as field goals with a free throw rate (FTA/FGA) of 52.3%. Indiana’s aggressive play does force opponents to turn the ball over on 23% of their possessions. The Hoosiers also do a good job defending two point shots, 47% allowed, but struggle to defend the three where opposing teams are shooting 36%. While most elements of the Indiana defense are above average, the 18 points per game that the Hoosiers allow at the charity stripe continue to be the difference between wins and losses.

Despite their struggles defensively, Indiana has been able to score the ball. It all starts with shooting as the Hoosiers have an effective field goal percentage of 55%, 25th nationally, thanks to 53% two point shooting and 39% three point shooting. Indiana is an above average offensive rebounding team (35 OR%) and also gets to the line fairly often (FTA/FGA: 53%). Crean’s squad continues to turn the ball over a bit too often (21% TO Rate) but, to his credit, has consistently improved in this department. Indiana has scored over a point per possession in every Big Ten game which means that a few more defensive stops could easily yield a few more wins.

Indiana plays a relatively average tempo at 63 possessions per game, which puts them right in the middle of the Big Ten. Michigan averages just 58 possessions per game and continues to try to slow games down as much as possible. The Wolverines will want to play the game at their “road tempo”, which is even slower than average, in order to ensure quality looks at the basket. Tom Crean spent the majority of his pregame media address focusing on Michigan’s transition game, calling the Wolverines “the best transition basketball team in the Big Ten”. Personally, I don’t expect Michigan’s transition game to decide this game one way or another, but perhaps Crean knows something we don’t.

Personnel wise it all starts with 6-foot-9 forward Christian Watford, a talented inside out player that shoots 45% on twos and 41% on threes. While his shooting numbers might not look like much, Watford’s athleticism and aggressive style of play allows him to get to the free throw line (FTR: 50%), where he converts at an impressive 83% clip. Consistency has been a bit of an issue of late, as Watford scored just 3 points (on 5 shots) versus Penn State and 4 points (on 13 shots) at Minnesota.

On the wing, Verdell Jones takes the majority of Indiana’s shots but he’s not too efficient. Jones also has the ability to get to the free throw line but he’s just a 63% shooter once he gets to the charity strip. His assist rate of 28% is the best on the team but he also turns the ball over on 27% of the possessions that he uses. Maurice Creek is a shell of his former self, as he continues to recover from his brutal knee injury, and is averaging 8 points per game with an eFG% of 49%. 6-foot guard Jordan Hulls isn’t your traditional point guard but he is a tremendous shooter, connecting on 49% of his three point attempts.

Freshman Victor Oladipo has been impressive for Indiana, averaging 9 points and four rebounds. Beyond the numbers, Oladipo is a sparkplug for the Hoosiers, as he provides a major lift with his energy and athleticism and has a knack for making big plays. Jeremiah Rivers, at 6-foot-5, is Indiana’s best perimeter defender and will most likely be tasked with defending Darius Morris.

Indiana doesn’t have many great options on the block. 6-foot-9 Derek Elston is a solid defensive rebounder and averages 6 points and three rebounds per game. Tom Pritchard will also play some minutes down low but hasn’t provided much production offensively. Facing Pritchard and Elston down low should be a relief for Michigan, who has had to deal with the Morris twins and Jared Sullinger over the last two games.

Free throws and turnovers are the statistics to watch and if Michigan has a solid advantage in both departments they should win the game. Michigan tends to play games with few fouls on either end, as the Wolverines don’t foul or get to the line. Indiana is the just the opposite. If Michigan is able to play aggressively and attack the Hoosier defense, the Wolverines should be able to outscore Indiana by a significant margin at the charity stripe. Similarly, Michigan has struggled holding onto the ball at times this year and also hasn’t forced many turnovers. Indiana turns it quite a bit but also forces turnovers on a regular basis. If the Wolverines can value the basketball on the road they should have a good chance to win the turnover battle. Obviously you have to make shots to win but if Michigan is able to exploit Indiana’s most glaring weaknesses on both ends of the floor they will be in good shape.

Pomeroy likes Indiana in this one, giving the Hoosiers a 52% chance at victory and predicting a 66-65 final score.