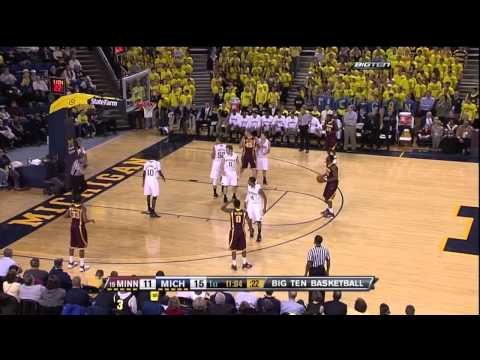 Jordan Morgan and Evan Smotrycz have both developed the tendency to pick up ticky-tack fouls early on in games. It’s not just those two, all of Michigan’s bigs are picking up fouls at a high rate, 5.4 fouls are called on Jordan Morgan per 40 minutes, Smotrycz 4.8, McLimans 5.5, and Horford 7.5. Some of these fouls appear very minor but their consequences are not. The team that attacks the rim is rewarded and in this game that was Minnesota. Unfortunately, it appears the game-plan for most teams that play Michigan is to attack our bigs and get them in foul trouble. The default position for most Big Ten teams is to attack the rim and rebound, but teams know it is extremely easy to draw fouls in the post against the Wolverines. Smotrycz was pulled for his second foul after just six minutes and could have contributed to throwing off his shot for the rest of the game. Morgan was pulled for the remainder of the first half at around six minutes and was in foul trouble throughout the rest of the game. Out of everything, early foul trouble may be Michigan’s biggest problem right now — especially when limiting opposition free throws is a primary focus of the defense.

Here we’re using Hardaway’s first made 3-pointer of the game to illustrate a larger point: Hardaway was the only Michigan player who truly found a groove on offense. Hardaway, along with the rest of the team, has struggled the past few games but it was very good to see him play with confidence. He had a very impressive reverse early in the game and from there he just kept scoring. When his shot is falling, Tim Hardaway is one of the best freshmen in the Big ten. And his offense was a big reason Michigan was able to stick around against Minnesota for as long as they did. What was especially impressive to see from Tim’s game last night was not only how he knocked down 3-pointers but also how he attacked the basket. This play isn’t all that interesting, with Tim just hanging out around the perimeter, reading Colton’s pick and popping out to the 3-point line.

This was just a crushing way to end the half for Michigan. Good teams finish both halves strong, and Michigan has struggled to do that this year. In this stretch, Michigan went from being up 24-15 and in control to down 31-26 at halftime. Featured in this run was a little bit of everything, with the Gophers attacking the rim and hitting free throws as well as finding looks outside and from mid-range. Up to that point in the game, Minnesota had been struggling to find a groove, and it’s tough to figure out what happened that allowed them to flip the switch. Michigan stayed in a consistent man-to-man throughout because of Beilein’s hesitancy to go to zone with a shooter as dangerous as Hoffarber on the court. For some reason, this team has trouble finishing out halves.

This was a rough play for Michigan. Down eight with under two minutes left, you need to get a quick stop, get the ball back and score. Instead, Michigan gets the stop but allows Minnesota to grab not one offensive rebound but two, eating up 40-some seconds in the process and all but sealing the game. The first one was especially agitating because it was off a free throw. It was a tough ball to get to, but Sampson’s rebound off the missed free throw illustrated what Zack Novak was saying before the game: sometimes, it just takes knowing where the ball is going to be when it comes off the rim. If Jordan Morgan is able to anticipate where that ball goes, it’s reachable. Minnesota’s second offensive rebound would have been really tough for Zack to get to, but also pointed toward what the players were saying after the game about the Gophers getting a lot of 50-50 balls.

Another key play, another Hardaway 3-pointer. This was a big shot, and went a long way toward Michigan’s very late push at the end of the game. While the play above may have ended any plausible hope of a comeback for Michigan, Hardaway’s 3-pointer opened the game up for the possibility of an improbable comeback. Not much to the play, Michigan just needed a quick bucket if they were to have any hope of coming back and Hardaway provided it. We’ve been seeing more and more Tim’s ability to create his own shot, we just haven’t seen it on a consistent basis. On this play, he creates enough space between himself and his defender to get off the triple, albeit with a hand in his face.