Things haven’t been pretty when Michigan travels to East Lansing. The Wolverines haven’t won at the Breslin Center since 1997 and, quite frankly, they haven’t come close. The best and worst recent Michigan teams have all been blown out at the Breslin Center no matter if it was Dion Harris, Avery Queen, Daniel Horton, or Dani Wohl that started at point guard. Over the past decade, Michigan has failed to keep the margin of defeat in single digits and has scored an average of just 23 points in the first half.

Michigan State’s offense lives off of the offensive rebound. The Spartans don’t particularly care for the other nuances of offense – shooting, preventing turnovers, and getting to the line — but their rebounding more than makes up for their other deficiencies. Despite a rebounding advantage fueled by superior athleticism, Michigan State actually tends to shoot more jumpshots. The Spartans don’t get to the line often (FTA/FGA 36%) and shoot more threes than most Izzo-led teams. Michigan State’s below average two point shooting percentage, 47%, infers that the Spartans are taking more two point jumpshots than layups and dunks. Turnovers were a problem for Michigan State in non-conference play but the problem seems to be under control in the Big Ten with a turnover rate comfortably in the middle of the pack.

Defensively, Michigan State plays the same hard nosed, physical defense that the Big Ten has grown accustomed to. Games at the Breslin Center are called a special way, you can expect a little more hand checking and a more physical game overall. As per usual, the strength of Michigan State’s defense is not allowing good shots. Spartan opponents have an effective field goal percentage of just 46%, mostly due to 43% two point shooting. Michigan State has given up some quality looks from three point range where opponents are shooting 36%. Michigan State doesn’t force many turnovers and, as you would suspect, defensive rebounding is a strength. 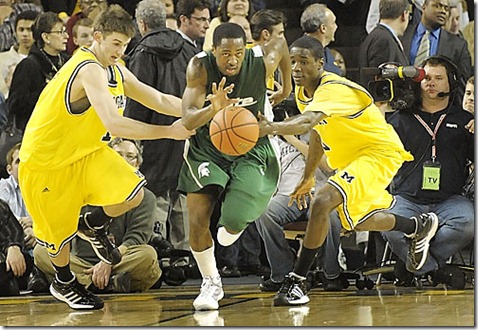 With Korie Lucious’ dismissal, a Michigan State team that was touted as one of Izzo’s deepest ever suddenly finds a void of depth in the backcourt. Against Michigan, the Spartans might not miss Lucious much. In two games versus Michigan last season the guard had just 3 points in 40 minutes total on 1 of 9 shooting with one assist to five turnovers. The problem for Michigan State is that Kalin Lucas, Durrell Summers, and Keith Appling are the only scholarship guards left on the roster. If you are going to be stuck with three guys for three positions, there are certainly worse options.

Lucas has probably hit more clutch shots than anyone in the Big Ten but Talor Battle. Summers carried Michigan State to the Final Four with his torrid three point shooting. Appling, a bonafide scorer in high school, has developed into Michigan State’s best perimeter defender. Sure, the trio has weaknesses – lingering injury concerns, consistency, or youth – but they are good enough to carry a team. Walk-ons Austin Thornton and Mike Kelber are also likely to see playing time with Lucious out.

Lucious’ dismissal could have the greatest effect on do-it-all forward Draymond Green. Green, who is averaging 16 points, 9 rebounds, and four assists per game in conference play, will likely have to spend more time at the three rather than his more natural four position. Don’t be surprised if Green even cameos in a “point forward” role at times. Green has the ability to play the three but he has had some difficulty defending the position and might not be quite as effective.

Michigan needs to figure out a way to get stops which means field goal percentage defense, defensive rebounding, and keeping Michigan State off of the free throw line are vastly important. These have all been areas of concern for Michigan over the last month and if Michigan State scores the ball as easily as other Big Ten opponents, this one will be over before it starts. Offensively, you can bet that Michigan is going to struggle to get clean looks at the basket. The Wolverines will very likely settle for quite a few threes and they are going to have to make close to 40% of their long range attempts to have a legitimate shot at the upset.

Pomeroy likes Michigan State by 9, 67-58, in a 62 possession game.  I have a tough time predicting a game that close. Michigan State’s strengths and weaknesses seem to play directly into Michigan’s and as underwhelming as the Spartans have been playing, Michigan has been worse.