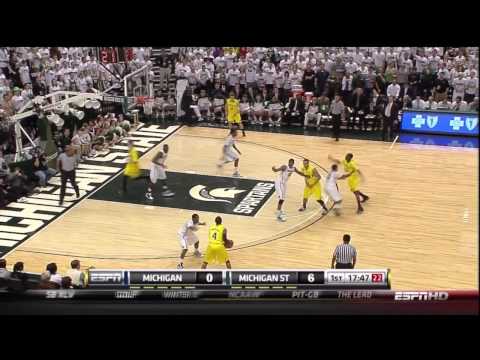 There were obviously an abundance of key plays in this one but we think that we still came up with a pretty good list. Please let us know in the comments if you think we missed one. It seems weird that Darius isn’t explicitly featured in any of these. But sometimes there’s just too many to choose from.

This shot not only kicked off Zack Novak’s ridiculous shooting night, it also calmed down the entire Michigan team. Michigan State started the game hot and rushed out to a quick 6-0 lead in the first two minutes. It looked kind of… typical. But with this play, Michigan made sure things didn’t get out of hand. Like most big plays in this game, it was set up by Darius Morris. Morris runs a little pick and roll with Jordan Morgan and the threat of his penetration commands three defenders. Delvon Roe and Kalin Lucas are both stuck with Darius after the screen which forces Durrell Summers to have to hang around the paint to help on Morgan rolling to the hoop. Darius sees that Summers has left Novak too much space and and rockets a pass across the defense. Zack launches and Summers has to close out quickly — as a result, he cruises by out of control and commits basketball’s cardinal sin by fouling a jump shooter. This was a great pass by Darius but Novak also did a tremendous job catching and shooting the ball quickly.

I was rushing back up the stairs to my seat and saw this play on one of the big-screen TV’s they have on the ground level. A guy working at Breslin was there and said, as the shot went in, “Who’s that guy?” Even I didn’t know for a second, but yes, that was Colton Christian nailing a very big shot early in a very big game. The important part of this play was that Michigan State can’t play any better defense than they did on this possession and Michigan still scored. They stuck with Stu Douglass when he tried to drive, didn’t allow Jon Horford to do anything in the post when he got the ball on the block and finally suffocated Darius as he brought the ball inside the 3-point line. State did everything right here as they let a rarely used freshman, that had made one field goal all season, shoot a long contested jumper at the end of the shot clock. And Colton nailed it. Huge play and any offensive production you can get from a lineup of Morris, Douglass, Vogrich, Christian, and Horford is a huge bonus.

This is where the game almost turned. After a back-to-back series of extremely sloppy plays on offense for both teams, Draymond Green goes coast-to-coast to nail a tough layup while getting fouled. The Izzone was alive for the first time in the second half (you know, when they weren’t begging for pizza or tiny “Farmers” basketballs) and the game was dangerously close to slipping away. This bucket also cut Michigan’s lead, which had been all the way up to 14 at one point in the beginning of the half, to just six. This was when Michigan had to decide if they were going to wilt or stand up and fight, and they chose the latter after this play. Overall, just some sloppy offense from both sides.  Michigan is not a particularly fast team and they don’t do a lot of running, and Michigan State reminded them why on this series of plays. Michigan stresses a slower “road tempo” and while they did a terrific job of slowing the game down (59 possessions total) this was one point where things got dicey.

Novak was tremendous all game and this late triple pushed Michigan’s lead back to the 13 points. Even though Draymond hit a 3-pointer at the other end right after, that shot cut the lead back to 10 instead of seven. This play illustrated a common theme throughout the night and one that went beyond x’s and o’s.  When the team was struggling or playing out-of-control or really needed a bucket, Zack Novak was there to step up. Not only during play, like in this example, but also (maybe especially) during breaks in play. Whenever the Wolverines even looked like they were doubting the outcome of this game, Zack Novak got in their faces and told them they were going to win. Similarly, whenever Michigan wasn’t sure what it was doing on offense and needed someone to bail them out of a tough spot, they looked to Novak, and he delivered. Every. Time. Here, Stu misses a long 3-pointer (too early on the shotclock) and Darius makes a heady play in grabbing the rebound. Darius kicks it out to Zack, who knocks down a rare wide open triple. The end result was great but when Douglass fired that original three with 30 seconds left I was ready to pull my hair out.

The two biggest shots of the game, hands-down. Stu Douglass stepped up late in this game and hit two of the biggest shots of his career. He didn’t have a tremendous performance overall, but he knocked down some extraordinarily tough shots when it counted. Michigan fans have been looking for signs that Stu has developed the ability to create his own shot when he has to, and he’s shown flashes of that throughout the season, but it’s been tougher for him to do in Big Ten play. In the first play, Stu takes gets the ball with about 15 seconds left on the shot clock and makes something happen. He makes a great move at the free throw line with Kalin Lucas draped all over him and is able to create enough space to knock down an extremely tough fadeaway jumper over last year’s Big Ten Player of the Year. In the second play, Stu makes his only (and biggest) 3-pointer of the night with just 22 seconds to play and Michigan nursing just a two-point lead. Once again, great shot by Stu but Darius makes it happen. Darius drives to the basket and preoccupies Draymond Green just long enough to open up some space for Stu to knock down the long 3 with Green’s huge hand in his face.