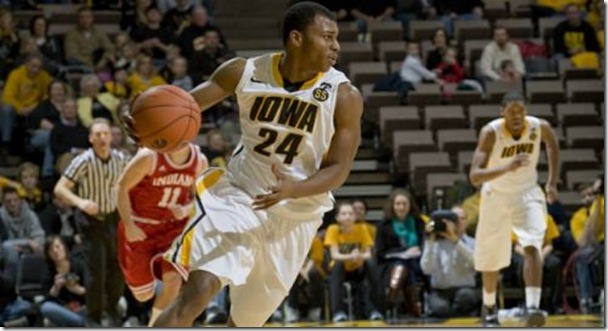 Michigan has six wins over Iowa in the past three seasons but has yet to face Fran McCaffery’s new look Hawkeyes. Under Todd Lickliter, Iowa played a slow deliberate style of basketball that featured endless three point attempts. Now McCaffery has attempted to move his uptempo style of basketball from upstate New York to the cornfields of Iowa. The fast paced style of play made it to Iowa City intact but the victories aren’t there yet.

Iowa is the fastest team in the Big Ten, averaging 67 possessions per game, but they are also the worst team with just a 1-7 record and the worst efficiency margin in the league. Michigan heads into this game on the heels of its biggest win of the season but hasn’t been much better overall.

Iowa is the only Big Ten team to score under 1 point per possession in conference play and has struggled across the board offensively. Iowa turns the ball over often than anyone else in the Big Ten, rarely gets to the free throw line, and is the second worst shooting team in the league. The one thing that Iowa does well offensively is clean up the glass. The Hawkeyes are the fourth best offensive rebounding team in conference play, grabbing 33% of their misses.

Iowa’s defense isn’t quite as bad as its offense, but it’s still average at best. The Hawkeyes are surrendering 1.13 points per possession which ranks 8th in the Big Ten, closer to the bottom three than the middle of the pack. Iowa forces turnovers as well as anyone else in the league as Big Ten opponents have coughed the ball up on 22.3% of their possessions. Iowa also does a good job of keeping opponents off of the free throw line with the 8th best free throw rate (FTA/FGA) allowed in the nation. Iowa’s defensive problems occur when opposing teams manage to get shots off. Iowa has the second worst effective field goal percentage allowed in conference play, 57.2% – 56% on twos and 39% on threes. Iowa has also been the worst defensive rebounding as Big Ten opponents are grabbing 39% of their missed shots.

Iowa’s roster is a mash-up unit of old and new pieces of contrasting styles. Some we are familiar with – notably Matt Gatens, Jarryd Cole, and Eric May – but many others are relatively unknown to Michigan fans. May (9ppg, 48% 3pfg) and Gatens (13 ppg, 36% 3pfg) are the teams best three point shooters but May turns the ball over far too often and both are anemic rebounders. 6-foot-7 250 pound Jarryd Cole starts down low and is a solid rebounder for an undersized post player, averaging 7 points and six rebounds per game.

The newcomers to remember are junior college transfer point guard Bryce Cartwright (pictured above) and 6-foot-9 freshman athlete Melsahn Basabe. Cartwright averages 11 points and 5 assists per game but isn’t the most efficient player, shooting 42% on twos and 26% on threes while turning the ball over three times per game. Basabe might not be the most skilled player but the freshman possesses game changing athleticism, averaging 10 points and 7 rebounds pre game. Basabe is the third best shot blocker in the league and fourth best offensive and defensive rebounder – a poor man’s Trevor Mbakwe. Freshmen wings Zach McCabe and Roy Marble (a Michigan native) will both play around 20 minutes per game off the bench.

Pomeroy likes Michigan in this one, 66-59, with a 76% chance to win in a 63 possession game. This is a game that Michigan can win with a solid performance. However, it’s tough not to worry about Michigan’s youth and consistency issues especially on the heels of Thursday’s huge win. Sometimes keeping a level head after a big win can be just as difficult as staying motivated during a losing streak. 10 minutes in we should have a big clue as to whether Michigan is going to handle business or lay an egg.