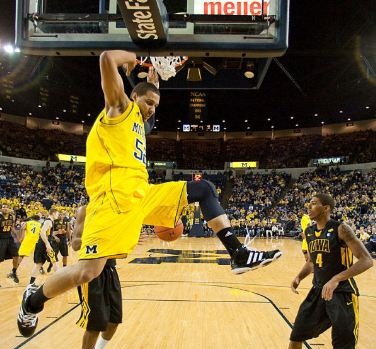 It was perhaps the most enjoyable Michigan game to watch all year. It featured everything from 60-foot assists, follow up dunks, a barrage of three pointers, and even a rare triple double. Darius Morris was the catalyst, notching a triple double, but he had plenty of help. Morris’ support cast shot the ball extremely well and allowed him to do what he does best: distribute the ball.

All five Michigan starters scored in double figures and Novak, Hardaway, Smotrycz, and Morgan combined for a 76% effective field goal percentage on 23 of 38 (12-22 3pt) shooting. Morris’ triple double was just the third in Michigan history and the first one against a Big Ten foe.

Michigan’s offense was nearly perfect. The Wolverines consistently made the extra pass necessary to turn good looks into a great looks. The game was a statistical marvel as the Wolverines scored 1.36 points per possession with an effective field goal percentage of 71.4% –68% on twos and 50% on threes. Michigan attempted half of its field goals from three point range but when you make 14 of 28, it’s tough to complain about the ratio. Michigan turned it over on just 16% of its possessions and rebounded 30% of its misses. The only negative offensively could be the 8 free throw attempts. Michigan did a great job of controlling the tempo of the game, slowing the game to 64 possessions and the Wolverines outscored Iowa 7-0 on fast break scoring.

Despite playing almost perfect offensive basketball, Michigan’s defense left something to be desired. Iowa, statistically the worst offense in Big Ten play before this game, scored 1.14 points per possession for the game and got numerous easy looks at the basket. Some of this production came after Michigan’s lead ballooned to 20+ points but that wasn’t the only time Michigan’s defense struggled. Iowa turned the ball over on just 16% of its possessions and posted a respectable effective field goal percentage of 53.5%. Michigan rebounded a more reasonable 69% of Iowa’s missed shots but allowed Iowa to attempt 17 free throws. Melsahn Basabe was nearly unstoppable, scoring 25 points on 9 of 11 shooting with 8 rebounds (4 off.).

This was a very good performance and an enjoyable game. Early on it looked like Michigan might let Iowa steal one but Michigan went into the locker room at halftime and figured things out. The first and last four minutes of each half are where games are won and lost and Michigan won the first four minutes of the second. Clinging to a three point lead at the break, Michigan was able to stretch this lead to 10 in just 85 seconds of game clock – they never looked back.

Next up, a trip to Columbus to face the last undefeated team in the country. Michigan gave Ohio State everything that it could handle in Ann Arbor but fell just short. That’s encouraging but several other teams have almost beat the Buckeyes as well, and time and again Ohio State’s size, experience, and shooting ability seems to win out.