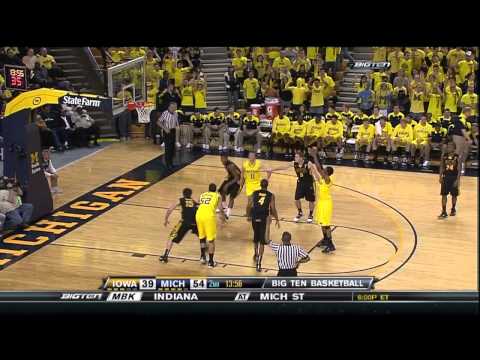 In honor of Darius’ career night, we had to expand “five key plays” to include a video featuring Morris’ triple double in its entirety (big thanks to Josh Houchin who put these videos together, again). The sophomore guard controlled the game at both ends of the floor and was the main reason Michigan was able to play at the pace they wanted to despite Iowa’s tendency to push the ball. When the Hawkeyes pressured Darius to force him into turnovers, he simply found the open man, nearly every time (though the great dish to Jordan Morgan from almost half court immediately comes to mind). He made some tough (and flashy) passes all game but credit also needs to be given to Michigan’s shooters — Tim Hardaway Jr., Matt Vogrich and Evan Smotrycz did a great job of finishing from beyond the arc. The rebounding was great, but largely a product of the game plan, implemented by the assistants: bigs focus on boxing out, let the guards clean up. Darius scored, dished, and cleaned up nice for the third triple-double in Michigan history (and second in two years!).

This was not only a great play on the fast break by Stu Douglass but it was also a key early basket for Michigan. Iowa came out firing right from the get-go and Michigan was having a very hard time stopping them on defense, so it was imperative early on that the Wolverines keep up with them on the offensive end. This play not only was a stop on the defensive side, it led to easy points on the other end. At the time, Basabe was dominating the game and Iowa was up 13-10 with the crowd mostly out of the game. This play really ignited the crowd and was a sign of how fun this game was going to be to watch. Stu, not a great finisher in transition, shows some excellent awareness with the ball and Hardaway does a good job of being ready and finishing strong. This is also symbolic of one of the most surprising stats of the game, Michigan outscored Iowa 7-0 in transition.

As you can probably tell from previous 5 Key Plays installments, I’m a big fan of ending the first half strong. These are some of the most important possessions of a game and, unfortunately, Michigan hasn’t done a great job executing in this situation. This game was different as Michigan made sure it went into the locker room with a lead at home. Vogrich’s shot was from way downtown and gave Michigan a one-point lead while Darius’ bucket stretched it to three. After a stop, the Wolverines went into the locker room knowing they hadn’t played good defense, Iowa had played about the best Iowa can play, and they were still up three points. Michigan actually managed to go “two-for-one” down the stretch and it almost worked. Beilein has tried to do this several times over the last few years and Michigan rarely scores the ball on the quick possession. This time, Morris converted on the short possession, Michigan got a stop, and had finished the last shot (which missed). John Beilein likes to mention Stu and Tim as “quick-trigger” guys, or guys who have the ability to get off a quick shot with a hand in their face, but maybe he should include Vogrich in that category, too. It’s usually Tim and Stu being asked to shoot at the end of the shot clock while Vogrich has plays run to get him open looks, but this time he stepped up in a big way, knocking down a very long, hotly-contested 3-pointer.

Jon Horford continues to mature and improve and I was glad to see him get in the game and do some damage. The freshman was extremely efficient (2-3 for 4 points, 4 rebounds, an assist and a block) and really electrified the crowd with this put-back dunk. This play is really just a matter of being exactly where he was supposed to be when Darius went up for the layup and reacting quickly. His man left him to help on Darius and Jon wasn’t getting boxed out. The easiest dunk that Horford will have in his career. (Was it an intentional pass by Morris? You be the judge.) Horford continues to make the most out of his time on the court, and as long as he continues to do that he’ll see more and more time. It’s clear the coaches love working with him and are genuinely happy for him when he does stuff like this. John Beilein gave a big smile and said Jon was “unique” when asked about him after the game. I think the coaches get a big kick out of him.

We’re including the three D-Mo assists the led directly to dunks for Jordan Morgan in the second half. The first is well-documented: Darius dribbles the ball almost to half court and rockets an amazing pass between four — count ’em — FOUR Iowa defenders and the cameraman got a great angle on how the whole thing transpired. On the second play, Jordan passes the ball to Darius and sets a ball screen. Iowa double-teams Darius off the screen (part of Fran McCaffery’s plan to force Michigan into turnovers) as Jordan rolls to the basket, wide-open. Darius dribbles to the lane and finds Morgan around two Iowa defenders for the dunk. The third play might be just as impressive as the first. Jordan sets a non-screen, off which Jordan’s defender doubles once again, and this time Darius draws both him and his own defender out far from the post and makes a great pass over two defenders to get Morgan the ball, wide-open, under the basket. This last play came when the Hawkeyes had come back and made it just a 12-point game. Morris does a great job finding Morgan, but there’s no denying that Morgan has done a good job of finding the open space and making himself an available target.