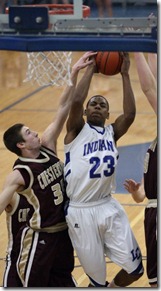 Southfield lost to Detroit Country Day and Amir Williams, 79-58, and Brundidge had 15 points in the loss.

Southfield responded with a blowout win over North Farmington and Brundidge had 18, 13 in the first half. Southfield is 8-3 and first in the OAA with a 5-1 conference record.

MAS left this report in the comments:

As for Brundidge, he had a rough shooting night missing shots I normally see him hit. He finished with 15 points on 5 for 18 (3 or 4 forced shots) shooting. The big positive was he was able to get his shot off against a very good athlete Knight that is 6-3 or 4 and is a D-1 WR prospect for football. CB quickness allowed him to create some open shots.

Burke continues to put up monster numbers. In a span of four games in six days last week, Burke scored 110 points (27.5 ppg), all in victorys. (HT: @ohiohshoops) Burke is averaging 24 points and 7 assists per game and Northland is now 14-0.

Robinson had 27 points on 10 of 17 shooting in a 29 point win over Zack Novak’s alma-matter, Chesteron. Robinson was playing with a heavy heart in honor of Coaches vs. Cancer:

“My grandma passed away from lung cancer and one of my former AAU coaches was just diagnosed a couple weeks ago,” the silky Lake Central junior said after an emphatic 79-50 win over Chesterton. “I dedicated this game to them. I just wanted to go out and play hard the whole time.”

Robinson had 19 points earlier in the week in a 68-56 loss to No. 1 Merrillville. Robinson kept Lake Central in the game early on but only had 2 points in the fourth quarter.

St. Mark’s hasn’t played since January 22nd due to exams but will be back in action tomorrow versus Belmont Hill.

Pershing knocked off Denby by a score of 62-45 but we haven’t been able to locate a stat line for Dorsey-Walker.

Hare had a monster performance in a win over Midland, scoring 32 points, grabbing 15 rebounds and swatting seven shots.