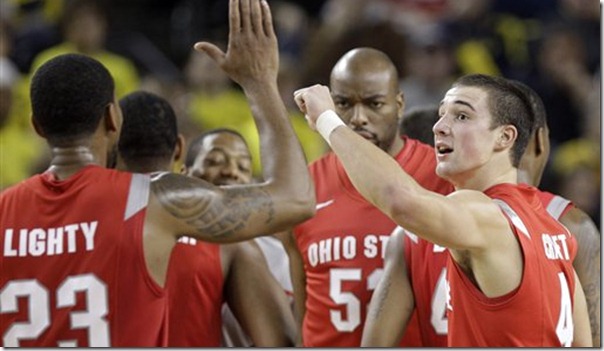 It’s hard to write previews without focusing too much on the most recent couple of games. It’s just as hard to muster optimism during a losing streak as it is to get carried away with the notion of momentum after a couple wins. Momentum means something, you’d rather go into a game playing good basketball, but its importance is dramatically overblown. 22 games into the season, it’s safe to say that teams have built up sufficient resumes to judge their entire body of work. Michigan heads to Columbus tonight with momentum after a pair of wins but the reward is a match-up with the nation’s consensus No. 1.

The simple two step recipe hasn’t changed for the Buckeyes. Step 1: Give the ball to Jared Sullinger on the block and watch him work. Step 2: Kick it out to the stable of talented wing players and let them shoot it. It’s easy to game plan when you have one of the top three players in the nation and it’s even easier when you have four players that shoot over 40% from three point range to surround him.

Three weeks ago, Michigan hung with Ohio State for forty minutes in a game that featured six lead changes and five ties. Michigan stuck around in that game because of its ability to match Ohio State’s offense. Michigan actually out-shot Ohio State that day, shooting 59% on twos and 46% on threes. If the Wolverines want to win at Value City Arena, it’s going to take more than hot shooting. Ohio State’ offense has been nearly unstoppable and Michigan would need to stop an offense that’s rarely been slowed down this season.

Ohio State’s offense is averaging 1.15 points per possession in conference play, a figure that’s tied for second best in the league. Ohio State is the best shooting team in the conference, with a 58% effective field goal percentage – 53% on twos and 45% on threes –  Michigan is a close second at 55%. Despite the nation’s sixth best turnover rate, Ohio State has turned the ball over more often than six other teams in conference play. Ohio State didn’t get to the free throw line very often in non-conference play but have posted the second best free throw rate, 43% (FTA/FGA), in conference games. The Buckeyes only rebound 30% of their misses, which ranks 8th in Big Ten play, but offensive rebounding isn’t that important when you make so many shots.

Defensively, Ohio State’s philosophy remains the same: force turnovers and don’t foul. Ohio State allows the fewest free throws in the league with a free throw rate of just 24%. They also turn opponents over more often than every Big Ten team but Iowa. (Coincidentally, the Hawkeyes don’t foul either, ranking 2nd in FTR allowed and 1st in forced turnovers.) The Buckeyes shooting defense and defensive rebounding are both above average and the Buckeyes have the second best three point defense in the league.

Ohio State forces you to pick your poison. Last time around, Michigan focused all of its efforts on Jared Sullinger and was relatively successful, holding Sullinger to 12 points on 4 of 6 shooting with six turnovers. The drawback to doubling Sullinger is that it allows Lighty, Buford, Craft, and Diebler plenty of wide open three point looks — connecting on 7 of 14 three point looks last time around. If you are Michigan, without a true dominant defensive big man, you have to double Sullinger and hope for the best.

Ohio State’s statistical profile has fewer holes than any other team that Michigan will face this season. After winning their first two conference home games by three points each, Ohio State has dismantled Iowa (22 pts) and Purdue (23 points) at home. Pomeroy projects a 17 point Ohio State victory and gives Michigan a 4% chance at victory – less than a third of the chance Michigan had at winning in East Lansing.