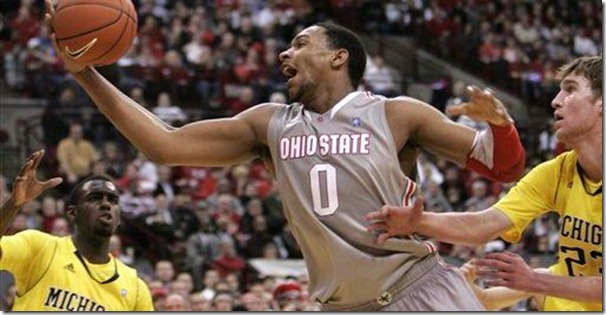 Missed opportunities. That’s all that will be on Michigan’s mind for the three and a half hour bus ride back to Ann Arbor. The chances were there but at some point you have to make your own break – hit a big shot, force a turnover, just make a play. A week ago in East Lansing, Michigan made those plays. Tonight, Michigan missed 14 layups, made just one of four free throws, and turned the ball over 13 times. That’s just not good enough to win on the road, especially against the nation’s best team.

This was a game of two halves. In the first half, Michigan played some of the best defense we’ve seen in a while. Michigan forced turnovers (10) and held Ohio State to just a 40% eFG% which resulted in just 23 points in 32 first half possessions (.72 PPP). In the second half, the defense fell apart as Ohio State scored 1.26 points per trip. The Buckeyes shot the ball better (61 eFG%), turned it over just four times, and attempted 21 free throws in the second stanza.

For one of the first times this year, Michigan had trouble with an opponent playing small ball. Matt Vogrich was sidelined with an illness and Michigan didn’t have many options in the backcourt. Evan Smotrycz is not quick enough to guard David Lighty which meant Morris, Douglass, Hardaway, and Novak basically had to be on the floor whenever Craft was in the game (the entire second half). Michigan needed production from its guards and Douglass and Novak just couldn’t provide it. There have been some questions where 2011 commits Trey Burke and Carlton Brundidge fit into the equation but today’s game proved that you can never have too many guards.

I’ll refrain from discussing officiating, one of John Gasaway’s four dullest topics for a college hoops blog, but, regardless of their merit, fouls played a huge role in this game. The shooting, rebounding, and turnover numbers were all relatively even but Ohio State attempted 25 free throws to Michigan’s four. Ohio State was the more athletic team, and has a track record of not fouling, but it was disheartening to see Michigan attempt just four free throws despite attacking the basket more aggressively than we’ve seen all season. Michigan attempted just 35% of its field goals from three point range, well below its season average, so it wasn’t as if the Wolverines were just firing up threes. The seven Michigan team fouls (and 0 Ohio St. fouls) in the first 5:41 of game clock in the second half certainly didn’t help matters.

William Buford also hit some huge shots in the second half, connecting on three of four long range attempts. His first two back-to-back threes were critical, turning a six point Michigan lead into a tie game in under a minute.

Michigan doesn’t have long to regroup because the next three games are probably the most critical stretch of the season. Michigan travels to Penn State for a Super Bowl Sunday matinée before hosting Northwestern and Indiana. Penn State has been playing great basketball at home but Jeff Brooks is day-to-day with a shoulder injury and it would be a great chance to steal a road victory. The biggest question is whether we see the road team that won at Clemson and Michigan State or the one that was blown off the court at Indiana and Northwestern.