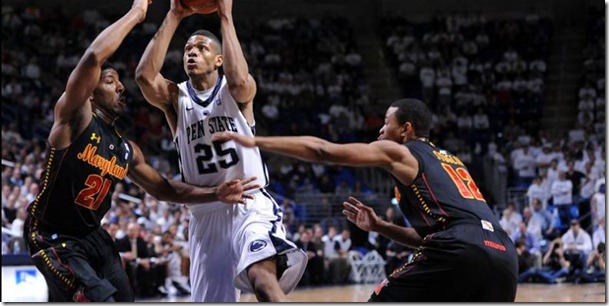 Eric Gibson from Raise the Curtains, a tempo-free stat centric Penn State blog, answered some quick questions about the Nittany Lions and how they have seemed to turn their season around with a handful of marquee home wins.

Around Christmas it appeared to be a doomed season for Penn State. The Nittany Lions were sitting at 7-4 and wrapped up the non-conference slate with a home loss to Maine. Now Penn State sits at 5-5 with three big home wins over Michigan State, Illinois, and Wisconsin. What changed?

I don’t think anyone really knows, even DeChellis. Taran Buie was suspended after the Maine game, but I don’t feel like he was a ‘cancer’ so to speak. I think most of this turnaround can be attributed to Andrew Jones’ emergence. If you don’t remember, he was a complete non-factor in the first PSU-UM game, which was pretty troublesome to me considering he’s a 5th year senior and UM’s frontline is pretty green. It looked like his senior year was going to be wasted, but since that game, he is averaging 9 points and 7 rebounds. His presence on the boards has been terrific. Penn State hadn’t been outrebounded in the last 6 games until Tuesday’s debacle (at Illinois). Brooks has also been key, but only because he’s been able to stay in games in conference (foul troubles limited him against Maryland, Maine, and Virginia Tech).

Jeff Brooks is listed as day-to-day with a shoulder dislocation. What’s the latest on his status and tell us about his improvement, now averaging 14 points and seven rebounds in his senior year.

The news about Brooks’ injury has been very positive. There has even been some talk of him playing on Sunday. The ligaments and tendons around his shoulder joint were not damaged as badly as it looked, apparently.  I personally can’t imagine him playing this weekend. As far as his improvement, the biggest thing has been his maturation. He’s always displayed the physical gifts, but he would crumble mentally after a mistake. His confidence is now unshakeable, and he’s able to move on from prior miscues. That has allowed him to realize his potential as a player. He’s finally taking great shots (68.3% eFG% in conference play) and not hanging around the perimeter. His injury has left all Penn State fans worried, some of whom have already thrown in the towel on the season. He has been by far our 2nd best player, and with Billy Oliver’s struggles, there’s no one to replace him.

What has been the key to Penn State’s big home wins?

They’ve controlled the boards in all their wins, but I don’t think there’s really one key that can be looked at for each game. They’re just making the big plays down the stretch. They were even making them on the road at Purdue and Ohio State, but they just couldn’t get that last stop to escape with the W. This team has never been stellar defensively, but offensively, they’re making the big conversions at crunch-time of close games.

Michigan carved up Penn State’s defense in the first match-up, shooting 70% on twos and 40% on threes. Has the Nittany Lions’ interior defense improved since then?

They aren’t giving up 1.27 PPP anymore, so yeah, I guess you could say they’ve improved. I think DeChellis has done a solid job mixing in different zone looks to keep other teams’ honest. I would bet you’ll see more of the same Sunday, especially with Brooks possibly being out. They still don’t force turnovers, but they’ve done a solid job at keep opponents off the foul line and limiting 2nd chances. The interior got worked at Illinois, though, but that was a lack of intensity more than anything else. Not making the travel excuse, but they just looked dead in Champaign (which could also be attributed to the heavy minutes the four seniors are logging).

I wouldn’t say reliable. Andrew Jones, like I mentioned, has emerged, but most of his points are manufactured from Battle/Frazier penetration. He’s just been able to catch the tough passes and finish (or crash the boards). Frazier is not a scorer, nor is he depended on to do so, but it’s been pretty frustrating to watch him refuse to shoot. If he could develop the confidence with a 6-10 foot runner or a mid-range pull-up, he could become really good. He’ll constantly get into the teeth of the defense, but 95% of the time he’ll throw a pass. Sometimes it works great, sometimes not so much. As far as bench production, I’ve been waiting for what feels like ever for Billy Oliver to break out of his slump. He’s got the best shooting form for a 27% shooter. Jermaine Marshall has replaced Woodyard as the first guard off the bench. He can score, but he hasn’t been getting many minutes to make an impact. That’ll probably change with Brooks’ injury.

What are your three keys to Sunday’s game?

From a Penn State perspective, the Nittany Lions will need to…