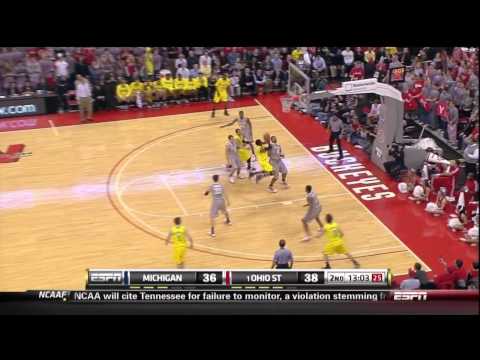 With a short turnaround between games, we are keeping the Five Key Plays for the Ohio State game short and succinct. Let us know if we missed anything in the comments.

If you haven’t noticed, we like to cheat and include montages rather than specific plays. Against Iowa it was Morris’ triple double, for this game we had Josh splice together film of all of Michigan’s missed layups. It looks like something out of a blooper reel that you would see at 2 AM on Fox Sports. Concentration and intimidation both play a part but you just can’t win on the road when you miss this many layups.

Hardaway dunks on Lauderdale after back door cut

This was a huge first half basket thanks to a great back cut by Tim Hardaway Jr. Novak makes the perfect pass and Hardaway does a great job of using the basket to protect him from Lauderdale’s shot blocking ability. Hardaway had several nice back cuts in this game, most of which occurred when DeShaun Thomas was guarding him.

Buford hits back to back threes early in the second half

William Buford manages to single handedly eliminate Michigan’s six point lead in less than a minute of clock time. On the first three, Hardaway is caught making a stereotypical freshman defensive mistake. He’s caught ball watching, trying to reach in as Craft penetrates, and simply lets his man drift wide open to the corner. Lighty is waiting to set a pick but it isn’t even necessary as Hardaway isn’t in the same zip code. The second three demonstrates why many people feel that Buford has first round draft pick abilities. Hardaway doesn’t play bad defense but Buford hits a simple step back three right over him.

This is a big play because it marked Michigan’s last run to get back into the game. Morgan’s dunk cut the deficit to just four points and gave Michigan life. Michigan wasn’t nearly as successful with the pick and roll as they have been but this was an instance of it working properly. It was a great pass from Douglass and one of the lone bright spots for the junior.

Michigan is already on life support at this point but this Sullinger layup pulled the plug. Ohio State shows great patience on this play, giving the ball to Sullinger once and then dumping it back to him again after things go awry. Sullinger gets great position the second time around and muscles it in over Morgan and Douglass’ late double team.