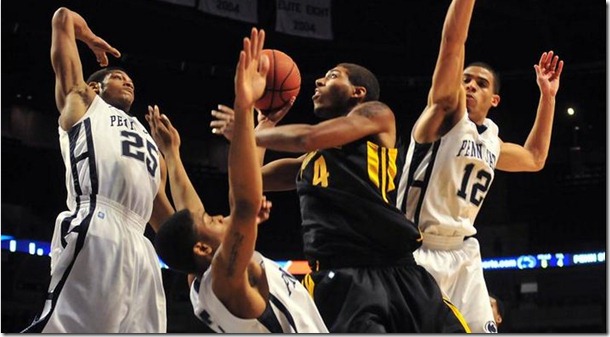 Big Ten teams are 14-40 on the road this season. Undefeated Ohio State owns five of those 14 road wins and 11 of the 14 have come versus one of the league’s bottom four teams (Northwestern, Michigan, Indiana, and Iowa). Penn State, a team picked near the bottom of the conference, has made a name for itself in conference play by defending homecourt. The Bryce-Jordan Center doesn’t have the prestige of Assembly Hall or a raucous student section to match the Izzone but, somehow, Penn State just keeps on winning at home.

Road games for Michigan have been a mixed bag and it has been tough to project Michigan’s level of play. When expectations are lowest, Michigan seems to surprise with a strong performance (Clemson, Michigan State, Ohio State, etc.). When it looks like Michigan might have a chance to win one on paper, the Wolverines have fallen flat on their faces (Indiana or Northwestern). Now, Michigan heads to Pennsylvania for a rematch with a team that it knocked off a month ago at Crisler Arena. This game qualifies as one that Michigan could have a chance to steal.

Since the loss to Michigan, Penn State has rebounded with wins over Michigan State, Illinois, Iowa, and Wisconsin at home. The Nits also lost at home to Purdue by 15, at Ohio State by 3, at Purdue by 1, and at Illinois by 17. They haven’t always been perfect but they have proven that they can beat anyone when they play well.

Offensively, Penn State is a jack of all trades but master of none. Penn State’s offense is the seventh best in the conference, averaging 1.07 points per possession. The Nittany Lions rank between fourth and seventh in all four major offensive statistical categories: eFG% (7th), OR% (7th), free throw rate (4th), and turnover percentage (7th). Penn State ranks 10th in three point shooting and has connected on just 31% of their long range attempts.

All signs point toward 6-foot-8 do-it-all forward Jeff Brooks missing Sunday’s game with a dislocated shoulder. Brooks suffered the injury just before halftime at Illinois and Penn State was outscored by 11 points after his injury. Brooks has been Penn State’s leading rebounder (7 rpg) and second leading scorer (14ppg). Without Brooks, depth becomes a concern for a Penn State team that played its bench for fewer minutes than any other major conference team.

After four years, there isn’t a Big Ten fan left that doesn’t understand what Talor Battle is capable of. The clutch point guard can hit threes from the edge of the center court logo or slash to the hoop and finish with an array of circus shots. Penn State’s strategy this year has often been to stay in games until the final four minutes and then let the senior work his magic. More often than not, it has worked.

If Brooks is out, 6-foot-7 forward David Jackson will have to step up. Jackson averages 11 points and five rebounds per game while shooting 44% on twos and 36% on threes. In the first match-up, Michigan stifled 6-foot-10 center Andrew Jones, holding the senior to 0 points on 0 shots with two rebounds in 14 minutes. 6-foot-1 guard Tim Frazier is a competent setup man but turns the ball over far too often and is not a threat to shoot from the perimeter (1-13 on threes). 6-foot-8 freshman Billy Oliver will likely see more minutes in Brooks’ absence. Oliver isn’t a great rebounder and takes over half his shots from three point range where he’s connecting at just a 24% clip. Wing guards Jermaine Marshall and Cammeron Woodyard are the primary options off the Nittany Lion bench.

Michigan’s offense exploded the last time these teams played, scoring 1.27 points per possession and shooting 70% on twos and 40% on threes in a 76-69 win. The game was close because Michigan’s defense wasn’t great and Battle, Brooks, and Jackson essentially got whatever shots they wanted. Penn State’s big three combined for 62 of Penn State’s 69 points. The Wolverine defense handled Penn State’s secondary players but role players usually play significantly better at home.

Pomeroy’s numbers give Penn State a 69% chance at victory, projecting a final score of 64-59. Those numbers assume that Brooks, Penn State’s second best player, will play. Pomeroy just wrote an article about Korie Lucious, where he cautions that we typically overrate the loss of a single player. He concludes that the loss of Jimmer Fredette, the nation’s most valuable player, would be worth about 10 points per game. Given Penn State’s lack of depth, you would probably say Brooks’ absence is worth something like 5 or 6 points, putting this game in the toss-up range if Brooks doesn’t suit up.