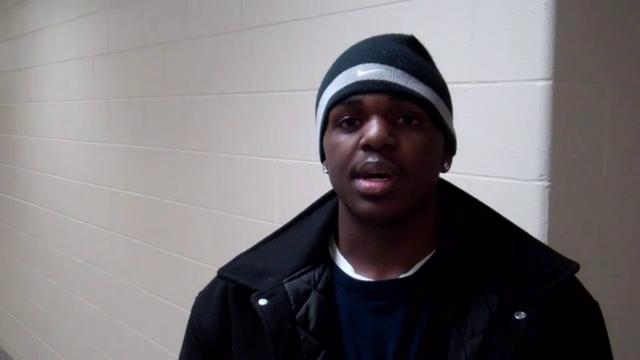 I made the trip to Clarkston last night to see Carlton Brundidge and Southfield take on the Wolves at their place. Here’s a video interview with Brundidge with a scouting report after the jump.


Clarkston played very well the entire game, forcing Southfield into turnovers and bad shots. In the second half, Clarkston extended its lead to double digits as Carlton ran into some foul trouble. In the fourth quarter, however, Desmond “Pee Wee” Barnes took matters into his own hands. The senior took over on offense and scored at least three straight baskets to draw Southfield to within striking distance. With about two and a half minutes left, Brundidge was whistled for a questionable blocking foul and sent to the bench with his fifth foul. His team stepped up in his absence, actually pulling ahead by two, but Clarkston sealed the game late with a pair of free throws, winning 56-54.

While he didn’t have his best game and never really got going, scoring 7 points, he did most of the things he’s known for: attacking the rim relentlessly, finding teammates and playing tough defense. Carlton looked frustrated at times on offense, especially given how the Clarkston defense was keying on him. He was able to penetrate and find open guys, but he wasn’t getting the whistles I think he’s accustomed to and that resulted in a few unsightly turnovers. There wasn’t a player working harder on defense, but Brundidge was gambling quite a bit — sometimes it worked, sometimes it left his teammates in poor position defensively. Brundidge didn’t attempt many outside shots from what I saw, instead forcing the issue in the paint. Overall, not the best I’ve seen Brundidge play but he wasn’t getting much help — from his teammates (outside of Barnes down the stretch) or the referees.