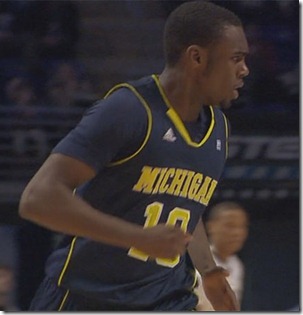 Nothing is easy on the road and today Michigan make things any easier. For long stretches of the game Michigan looked awful, falling behind by double digits in both halves. The offense was bogged down in the half court while the defense surrendered numerous open threes to a shorthanded Penn State team. Talor Battle was terrific as always, tallying 31 points for the second time versus Michigan this season. But despite all of the struggles, Michigan held things together and finished both halves on a strong note, pulling away for the victory. Breaking this game down into 10 minute “quarters” really tells the whole story:

Michigan outscored Penn State 48-24 in the final 10 minutes of both halves combined. We’ve harped on Michigan’s inability to finish halves this year but this was a perfect example of finishing on a strong note.

Tim Hardaway Jr. showed a level of mental toughness and resilience that we simply haven’t seen this year. Hardaway was awful for the first 30 minutes of the game, missing open shots and layups and picking up so many silly fouls that he couldn’t even stay on the court. He reentered the game with 7:40 to play and Michigan down nine. He took over and managed to tie the game in the next six possessions:

Michigan ran its entire offense through the freshman wing and he tied the game in just three minutes of game clock. Shortly after that stretch, he extended Michigan’s lead to five with a perfect assist to Jordan Morgan off the pick and roll and a strong drive and finish at the basket.

Michigan’s offense was awful for stretches but the final product was impressive. Michigan scored 1.20 points per possession and shot the ball extremely well — 50% on twos and 47% on threes for an eFG% of 57.8%. Michigan didn’t turn it over (9.2%), get to the line (11.8% FTA/FGA), or grab offensive rebounds (23.1% OR) but just made enough shots to win the game. Michigan only assisted 10 of 25 made shots and there was a lot of heads down full bore dribbling toward the basket by Darius Morris. That wasn’t the end of the world as Morris converted 9 of 15 two point attempts. Michigan actually didn’t attempt many three pointers as just 19 of 51 field goal attempts were from long range.

Defensively, Michigan’s performance still left a lot to be desired. Talor Battle consistently scored when everyone knew that he was going to take to take a big shot, finishing with 31 points, and Michigan had no answer for Tim Frazier’s speed and penetration ability as the sophomore tallied eight assists. Penn State scored 1.15 points per possession with an effective field goal percentage of 51.1% — 47% on twos and 36% on threes. Michigan managed to hold on after completely turning things around on the defensive glass. Penn State grabbed five of its eight offensive rebounds in the first 10:30 of the game before Michigan tightened things up on the defense glass. When all was said and done, Michigan rebounded a very solid 70% of Penn State’s misses.

Winning ugly is a developed talent. Winning when everything goes right should be expected but winning a game like this requires a certain amount of mental toughness. I’m not sure that Michigan had that mental toughness one or two months ago, but it is clear that they are growing up. Now the question is whether Michigan can take the next step and defend home court. Home rematches against Northwestern and Indiana, two teams that handed Michigan arguably their worst two losses of the year, are up next.