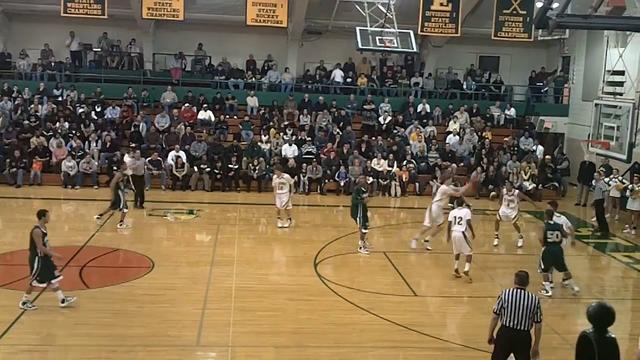 Northland made the trip across Ohio from Columbus to Cleveland to challenge the Lakewood St. Edward Eagles, the No. 11 Division 1 team in Ohio.  Northland trailed through most of the contest but never fell too far behind as Michigan commitment Trey Burke hit big shot after big shot to keep the Vikings in the game. Burke finished the game with 35 points in the 84-81 loss, 21 of them coming on three pointers. Burke was 7 of 9 on twos and 7 of 12 on threes and finished with 6 assists.

St. Ed’s was well coached, playing an efficient offense game and tough full court pressure defense to force Northland into tough situations. Northland fell behind by 9 points at the end of the third quarter before Burke went into action, willing his team back to take a 1 point lead with 16 seconds remaining. The Eagles would take their final lead on a layup with 6 seconds left before Northland inbounded the ball over Burke’s head and into the hands of a St. Edward’s defender.

Apologies for the supbar video quality, I had to film the game using a Kodak handheld camera and it was running out of batteries leading to a couple missed clips. It was a tough loss for a Northland team that was 65-2 over the last two and a half seasons but it’s better to take a loss now than in the state tournament. Full scouting report after the jump.

Overall, Burke was extremely impressive. The competition was tough and Burke was obviously the best player on the floor. He showed off his shooting stroke and relished the opportunity to take big shots. As things stand now, I’d pencil Burke in as next year’s backup point guard. Morris will command 30+ minutes per game but Burke will provide a competent change of pace. I also think that a backcourt lineup of Morris and Burke would be an interesting experiment at times. Neither player is a perfect fit for the one or the two position but while they have almost all of the bases covered if they are on the court at the same time. Burke provides shooting and quickness while Morris provides the distribution and size.