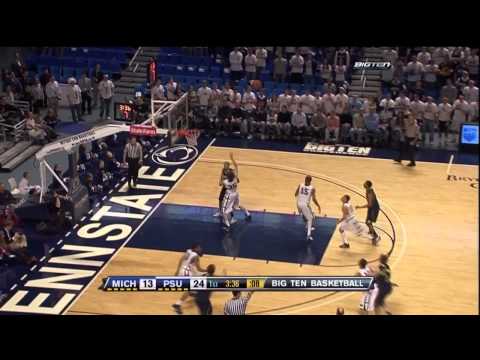 This flurry of great outside shooting could not have come at a better time. Before the barrage of 3-pointers, Michigan was down 11 with four minutes to go in the first half. The Wolverines looked, for all intents and purposes, dead. Then three possessions later, Michigan was down just one and had all the momentum. This was about as key of a stretch as it gets. On the first play, Darius Morris is classic Darius: reading screens, dribbling maybe a little too much, trying to sneak his way into the paint, and then finding Stu Douglass with an open window for a long 3-pointer. The next two threes came very fast, mostly thanks to good defense and defensive rebounding. As Bacari Alexander tweeted after the game, solid defense leads to fast-break offense. Both triples were results of alert fast-break offense and the defense not being in position to guard effectively. It was great to see Michigan find offense in transition because the half court offense had been stagnant early on.

This was just a tremendous sequence that we can use to highlight not only how great Darius was at getting into the lane and making something out of nothing, but also how effective Matt Vogrich was in key spots. The guard had 6 points, one assist, one block and one turnover in 23 minutes. And while Darius won’t get his own key play this game, he was the one keeping the Wolverines in it for most of the game. It seemed like whenever Michigan absolutely needed a bucket, he was there to find the paint and get the ball to the rim. In getting around Battle here, Darius shows off his ability to get by people using his big body instead of quickness (and he may have gotten away with a slight travel) and finishes at the rim. On the ensuing defensive sequence, Vogrich does a great job executing the switch with D-Mo on defense, timing his jump and getting a hand on the ball. As illustrated earlier, his defense led to a fast-break 3-pointer. Vogrich made plenty of mistakes — air-balling a three and throwing a pass over everyone’s head into the backcourt stand out — but he made just enough opportune plays to make up for Hardaway sitting on the bench for long stretches at a time.

This may have been the shot of the game. Michigan was down 10 at this point, looking as stagnant as they did most of the first half. This triple energized the team (especially Tim Hardaway Jr., who we’ll get to later) and kicked off the second-half rally that won Michigan the game. This was Stu’s fourth made 3-pointer (he was 4-5 on the day from deep). Stu was clearly feeling it and this was one of those shots that you need to hit if you’re going to steal one on the road. It looked like Stu had to put a little more arc on it, even. This is just a heck of a shot when Michigan needed it most.

This was a coming of age moment for Tim Hardaway Jr. Hardaway, after going 0-5 from the field for the game until the 7:24 mark in the second half, essentially dominated the game until there was 1:39 left. This run included all of Hardaway’s 14 points (two 3-pointers), two assists and a steal. I’m not sure what came over him, but whatever it is we want to see more of it. It’s stretches like this one that highlight Tim’s potential to be a star in the Big Ten — he has the ability to take over a game, he just needs to work on his consistency. I mean, he had zero points until there were seven minutes left in the game and the only notable plays he made in the first 30 minutes were silly fouls and missed layups. John Beilein had to love what he saw from Tim in this stretch, especially with the freshman taking the ball to the rack with no fear; that’s been something Beilein has harped on him learning to do all season and it appears Tim gets more comfortable doing that by the day. Hardaway’s run started with Michigan down nine and ended with the Wolverines up five and shooting free throws.

This shot could be described nicely as “ill-advised,” but I’m sure Ed DeChellis had a different word for it. It’s tough because Talor Battle makes these kinds of shots on a pretty consistent basis, and if it goes in he’s the hero and Tim Doyle is incessantly screaming “If loving Talor Battle is wrong, I don’t want to be right” for the rest of the broadcast. But this bad miss couldn’t have come at a more confusing time. Battle walks up the court with his team still very much in the game — down 3 with 45 seconds left. Not to mention the fact that his teammate took a knee to the head and is laying on the ground bleeding. There’s plenty of time to get a better shot than a pull-up NBA three in a four on five situation. Talor’s long 3 had the scent of desperation. This gave the ball right back to Michigan and forced Penn State into a fouling situation, effectively ending the game.