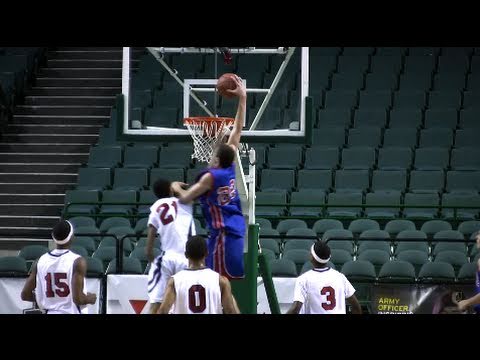 Update: Make sure to check out our Q&A with Nance as well.
We mentioned Max Bielfeldt as a possible 2011 target on Monday with the caveat that there might be another 2011 prospect in the mix as well. After a little digging over the last 24 hours, we’ve discovered another name on the radar: Larry Nance Jr.

Nance is a 6-foot-7 four man from Revere High School in Richfield, OH. Ohio HS Hoops recently listed him as the #2 unsigned senior forward in Ohio and this tweet from High Major Scoop lists offers from Western Carolina, Toledo and Wofford and interest from Toledo, Kent St., Michigan, CMU, and Western Michigan.

According to MaxPreps, Nance is averaging 18 points, 10 rebounds, 3 steals, and 3 blocks per game. As you can see in the video above, Nance is more of a skinny do-it-all combo forward than Bielfeldt who is more of a back to the basket player. He does appear to have some athleticism but not nearly as much as his father, Larry Nance Sr., the 1984 NBA Slam Dunk Contest winner.

Nance seems to fit the profile of what Michigan needs — a potential four man — a little more than Bielfeldt. Michigan appears to be casting a wide net for 2011 late bloomer types that are having productive season. Nance, who has reportedly grown significantly over the last two years, would fit the bill as a late bloomer. We’ll look to have more over the coming hours and days.