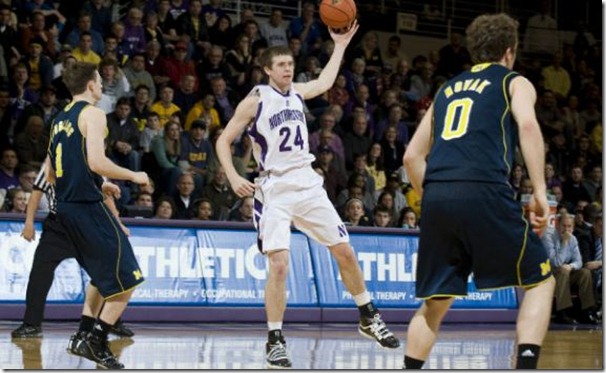 Michigan hosts Northwestern in a battle to stay afloat in the bulging midsection of the Big Ten.  Both teams are 4-7 and entering an important final stretch seven games with strong post season implications. When these teams met two and a half weeks ago, Michigan was crashing toward bottom on the tail end of a six game losing streak. Michigan lacked intensity early on and ran into the buzz saw that is Northwestern’s offense on a good day. Now, Michigan has the chance to prove that it has improved as a team and that it can defend its home floor in conference play.

Northwestern is scoring 1.08 points per trip in conference play (fifth best in the Big Ten) thanks to a friendly combination of experience and shooting ability. The Wildcats boast four players that are shooting 38% or better from three point range in Big Ten games: Drew Crawford (40%), Alex Marcotullio (40%), John Shurna (38%), and Michael Thompson (38%). Leave any of these four guys open beyond the arc and they’ll make you pay.

Northwestern still plays a style of basketball that you would expect. The Wildcats still attempt 42% of their field goal attempts from outside, don’t turn it over, and rarely crash the offensive glass or get to the free throw line. The one difference between this team and some other recent Northwestern teams is that there are some improved two point scoring options. Freshman JerShon Cobb provides an athletic slashing option on the wing while Luka Mirkovic has developed into a more reliable back to the basket scorer on the block, averaging 9.5 points per game in conference play. Those two combined with Shurna, Thompson, and Crawford all provide a better two point threat than you’d expect.

Defense has been Northwestern’s Achilles’ heel. The Wildcat defense has surrendered 1.15 points per possession in Big Ten games, a mark that ranks second to last (.01 ahead of Michigan) in the league. Big Ten opponents have posted an effective field goal percentage of 56.5% – 55% on twos and 40% on threes. Northwestern rebounds just 66% of its opponents’ misses, eighth best in the league, and allows a higher free throw rate than anyone in the league but foul happy Indiana. Open shots are available against Northwestern’s defense as long as you run a patient an efficient offense.

The first game between these two teams was Michigan’s second worst defensive performance of the season. Michigan allowed John Shurna a couple clean looks early on and the lethal scorer put on a clinic, scoring 22 points on 11 shots in the first half. The Wolverines unraveled as they consistently lost Northwestern’s shooters in transition and left them wide open for easy threes. If you are Michigan, finding and stopping Shurna has to be your number one priority. Evan Smotrycz looked relatively hapless trying to guard Shurna but Novak wasn’t much more successful. Michigan needs to figure something out. I suspect that it will be Novak trying to guard Shurna for the majority of the game but Michigan has to figure out a way to make someone else beat them.

Michigan also had an extremely difficult time defending any sort of screen and roll action in the first game. Jordan Morgan and Jon Horford were both abused when trying to play defense at the five position. In the second half it was Luka Mirkovic who methodically picked the duo apart, scoring 11 points in the last 20minutes. Morgan and Horford both have defensive weaknesses right now but Michigan needs them to understand the game plan, be in the right spot, execute, and force Northwestern’s bigs into more challenging shots. If Smotrycz struggles to guard Shurna, a cameo at the five for the three point shooting freshman will be likely.

Michigan’s offense the first time around was good not great. Considering this is a battle of the conference’s two worst defenses, it’s probably going to take great offense to win. Michigan needs to hit open threes and Darius Morris needs to play the complete – scoring & passing – game that we’ve grown accustomed to. Morris has been playing very well over the last several games and, as always, that’s the key for Michigan.

This one is going to be tough. Michigan continues to fall behind in games early on but a hot start would make things a lot easier. I worry about a “here we go again” mentality if Northwestern hits a couple threes to open the game. Pomeroy projects a 69-66 Michigan win and gives the Wolverines a 63% shot. Michigan has lost three straight games to Northwestern and losing a fourth, at home, would be a tough one to swallow. Let’s hear your predictions in the comments.