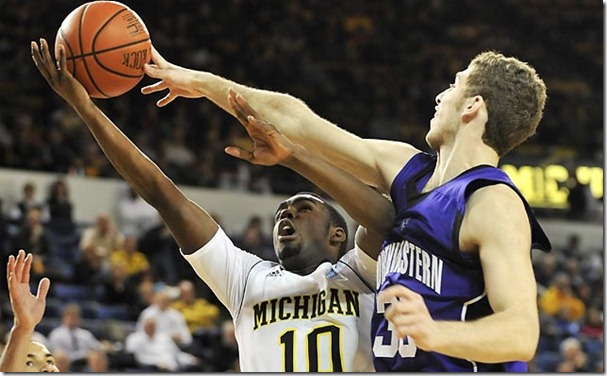 On Michigan’s first offensive possession of the game, Jordan Morgan went up soft for an easy layup, missed it, and went crumbling to the floor. It was eerily similar to Morgan’s rough start at Ohio State, except this time it was Mike Cappocci defending the rim rather than Jared Sullinger. I’m not sure what happened, but after that dismal attempt, the switch flipped. Morgan dominated the next 39 minutes in a way that we haven’t seen this year. He missed just one more shot and finished with 27 points on 13 field goal attempts. That’s not to say Morgan didn’t get any help from his teammates. Tim Hardaway Jr. was phenomenal yet again and Morris, Douglass, Novak, and Smotrycz were all solid in supporting roles.

Michigan seized control of the game in the first half due to Morgan’s solid play and some of its best defense this conference season. Michigan held the Wildcats’ vaunted offense to just .63 points per trip in the first half and held a commanding 34-19 break at the intermission. The second half was a roller coaster ride that wasn’t quite as enjoyable. Michigan’s defense crumbled in the second as Northwestern scored 1.42 points per trip thanks to Juice Thompson’s offensive explosion. The Wildcats hit three after three and mounted a 14-0 run late that cut Michigan’s double digit lead to just a single point with less than three minutes to play. As disappointing as it was to see Michigan collapse and let Northwestern back in the game, it was almost more encouraging to see the Wolverines close the game on an 8-0 run and regain control.

While the defensive performance was inconsistent, Michigan does deserve credit for slowing down John Shurna. Shurna is nursing injuries but he was nursing the same bad ankle when he destroyed Michigan earlier this season. I said in the preview that Michigan needed to make someone else beat them and they did. Michigan aggressively switched screens and forced Northwestern into some very difficult shots, many of which the Wildcats made in the second half. Despite the poor second half showing, I think it was obvious that the preparation and execution was light year’s better than the disaster in Evanston.

Michigan’s offense was very effective overall, scoring 1.14 points per possessions. The Wolverines shot the ball extremely well with an eFG% of 57.7% – 57% on twos and 40% on threes. We rarely see Michigan dominate on the glass and get to the free throw line but today they did. Michigan rebounded 38% of its missed shots and also posted a free throw rate (FTA/FGA) of 40%, both well above its season averages. Michigan turned it over a bit too much, just under 20% of its possessions, but overall this was another very strong offensive performance.

This was Michigan’s 15th win of the season and matched the Wolverines win total of a year ago – with seven games left on the schedule. Next up in Michigan’s revenge tour is a home rematch versus the Indiana Hoosiers. Christian Watford, the Hoosier combo forward that gave Michigan fits defensively, is questionable for the game with a wrist injury.