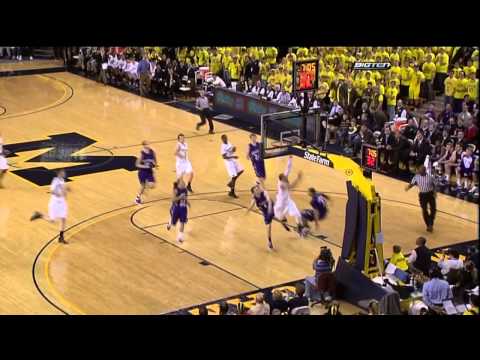 A majority of Morgan’s production this season has come via put-backs or feeds on the pick and roll. Against Northwestern, he was also particularly impressive running the floor. John Beilein uses a line about young big men, something like  “they think they are running fast, but they don’t know they can run faster.” Morgan began to find that extra gear in this one. If a big man can beat his man down the floor, he’s going to get free points. This was the case for Morgan in both of these plays as he worked hard to get up the floor and was rewarded by his guards. The layup with the foul was probably his most impressive basket of the game. Morgan caught the ball in the tough spot but had the body control to make a solid jump stop and finish with the contact. The second one speaks for itself as Darius Morris makes a phenomenal no-look pass as Morgan cruises down the lane for the two handed slam.

It felt like we were watching Tim grow up right in front of our eyes last night, didn’t it? Actually, it feels like that’s been the case for the past few games. He’s really coming into his own as a player and his comfort level with all the different roles Beilein is asking him to fill grows with each contest.

On the first play, Hardaway gets a little screen from Smotrycz and Hardaway decides to blow right by the smaller Thompson. Hardaway uses his off arm a bit but, once he finds himself in the lane, there’s no one to stop him from throwing down an emphatic slam. The second dunk is something that we just don’t see enough: an easy basket off an inbound play. Hardaway does a great job of setting the screen then flashing to the hoop. JerShon Cobb makes a freshman mistake and ends up chasing Hardaway as he’s already throwing it down. I don’t have the exact numbers but I would venture a guess that Michigan has been outscored by a significant margin on out-of-bounds scenarios and it would be great to see a consistent improvement in this regard.

There are varying degrees of 3-point shots and every player is more comfortable shooting a specific type of three. Hardaway has proven that he’s comfortable shooting the ball from the perimeter in a variety of different fashions. The first three is an example of Michigan running patient offense against Northwestern and not taking the first shot, but the best shot. Hardaway and Douglass both had opportunities to shoot the ball earlier in the possession but they kept the ball moving. Douglass seems to have complete understanding that the corner is the weak spot of the zone and makes the extra pass to get Hardaway the wide open look.

In the second clip, Hardaway gets the ball in an almost identical situation as his first dunk. He’s moving to the right toward the top of the key in an isolation situation. However, instead of taking the ball all the way to the rack, Hardaway uses the slightest of crossovers to get Shurna on his heels before pulling up for a three point shot. If Hardaway can consistently make shots like this, while also being able to take the ball all the way to the hole, he will continue to be very tough to guard.

This was a scary, scary stretch. Thanks to some very hot shooting and some careless mistakes by Michigan, Northwestern was able to pull the game to within one point with just over two minutes left. Alex Marcotullio hit a long 3-pointer at the 4:50 mark and from there the Wildcats would go on a 14-0 run spanning just over two minutes. This run had a lot to do with Northwestern, but also a lot to do with how Michigan’s defense deteriorated in the second half. Some of the threes were highly contested but JerShon Cobb’s was wide open after a defensive breakdown. Defensive lapses combined sloppiness by Stu and Darius against Northwestern’s full court press provided a chilling example that no lead is ever safe. Three of Northwestern’s four made threes in this stretch were over Zack Novak but I’m not sure you can blame him that much because he almost fouled the shooter on two of them. You can’t close out much better than that.

I don’t know which honor is more prestigious: being selected for Five Key Plays or being featured on SportsCenter’s Top 10. This play achieved both, and rightfully so. Not only is it a very entertaining play, but it was also an extremely important one. Darius does a great job breaking the full-court press from Northwestern and sprints past the Wildcats into the open court. Jordan Morgan has already positioned himself past half court as part of the press break. With the 2-on-1 situation, the play is obvious: lob it up. Darius makes a great pass and Morgan slams it home with authority. As I said before, this play did more than simply energize the crowd at Crisler — it also provided some much-needed cushion for Michigan. This play stretched the Wolverine lead, which Northwestern had cut to one just moments earlier, to seven and essentially put the game away. It was also a nice feather in the cap for Morgan, who had a monster game.