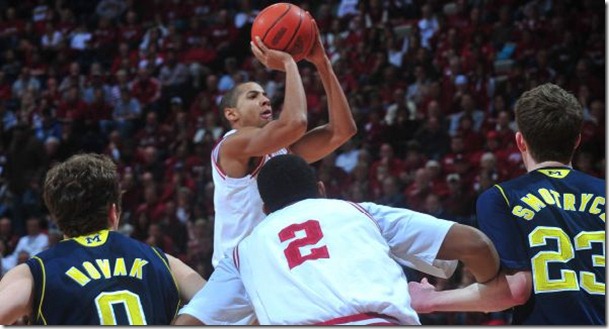 The bottom seven teams in the Big Ten all have Pomeroy rankings that fall somewhere between 40 and 75. Because of the relative strength of the conference’s bottom half, it should come as no surprise that Indiana, tied for last in the standings, isn’t that bad of a team. Indiana managed to knock off Illinois and Minnesota at home and lost at Michigan State by just one point in overtime. Don’t let their record fool you, Indiana’s efficiency margin is almost identical to Michigan’s and the Hoosiers handled Michigan with ease in Bloomington.

Now, Michigan looks to validate its resurgence and recent improvement by avenging its worst performance of the season. The biggest storyline heading into this game is Christian Watford’s broken left hand. The 6-foot-8 sophomore was playing the best basketball of his career before he broke his hand in East Lansing. He is questionable to play on Saturday (listed as “out indefinitely” in the official game notes) and had 17 points and 10 rebounds in the game at Indiana. Watford is a near perfect combination of length and athleticism with inside-out shooting ability. He’s obviously a very tough guard for Michigan because the Wolverines’ options at the four are either too short (Novak) or too slow (Smotrycz).

Indiana’s recent play can be summed up very nicely by one simple chart (HT: TOC)

Indiana’s offense started strong and peaked against Michigan before steadily deteriorating over the next seven games. Part of this is undoubtedly due to injuries – Christian Watford (wrist), Maurice Creek (season), and Verdell Jones III have all missed significant playing time – but Indiana’s offense is trending downward. Defensively, things appear to be coming together despite the injuries. Indiana has held four of its last five opponents under 1.01 points per possession after allowing six of its first seven opponents to score 1.10 points or more per trip.

Offensively, the Hoosiers rank in the bottom half of the Big Ten in all of the four factors: shooting (43.9 eFG%, 8th), offensive rebounding (32 OR%, 7th), free throws (27.6 FTA/FGA, 10th), and turnovers (18.4 TO%, 8th). If you watched the first game in Bloomington, it’s a bit hard to believe these numbers. Indiana scored 1.29 points per possession in that game with a 74 eFG% and a 40% offensive rebound percentage. That was arguably the best offensive game Indiana has played all year and was hands down the worst defensive performance of the year by Michigan. Michigan has improved a bit on the defensive end, but still ranks last in points allowed per possession. The three defensive keys for Michigan defensively are stopping Verdell Jones’ penetration, eliminating clean looks for Jordan Hulls, and Christian Watford not playing.

Indiana’s problems on the defensive end haven’t changed much over the last couple years. Fouls, fouls, and more fouls. Indiana has allowed a free throw rate (FTA/FGA) over 50% in Big Ten games this year and just can’t seem to avoid giving away free points. Indiana’s shooting defense, defensive rebounding, and ability to force turnovers are all average to above average but the free throws kill them time and again. Michigan, the worst team in the league at getting to the line, needs to figure out a way to attack Indiana and draw fouls.

Overall, there are two statistical battles to watch in this one.

With Creek and (possibly) Watford out, it’s a little easier to believe that Michigan can slow down Indiana. There are still some talented options to watch out for. Jordan Hulls is a lethal shooter with a 66 eFG% – 61% on twos and 47% on threes. Verdell Jones is a wired scorer that averages 12 points per game and has the ability to kill Michigan with his dribble penetration. Victor Oladipo is an electric athlete that seems to make all of the hustle plays. Will Sheehey is coming off a career high 15 point game at Purdue — analyzed frame-by-frame. Jeremiah Rivers has even showed the ability to hit a couple shots in Big Ten play and has efficiently contributed a few extra points to complement his great defense.

Pomeroy likes Michigan, 68-63, with a 71% chance of victory. Home court advantage plays a huge role, mostly because Michigan has been so awful at Assembly Hall that it’s hard not to expect a better home performance. Last year Michigan lost by 6 in Bloomington but beat the Hoosiers by 24 in the second game in Ann Arbor. There aren’t many “should wins” left on the schedule but this one certainly qualifies. Let’s hear your thoughts and predictions in the comments.