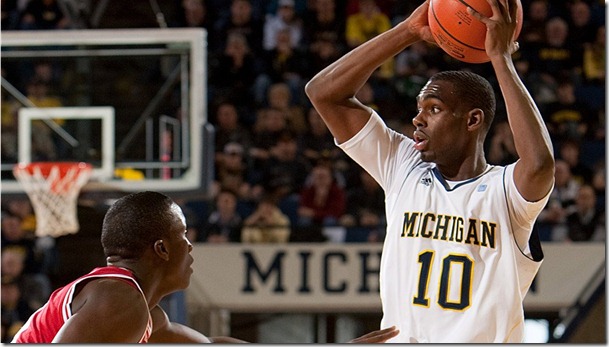 Inconsistency has plagued Michigan all season long but the last two games have upped the ante. For the second game in a row Michigan opened up a seemingly comfortable second half lead before falling asleep at the wheel. This time it was a 22 point lead with 5:26 left to play in the second half that crumbled into a four point win. A win is a win but finishing two games in a row with a relative lack of conviction certainly leaves a bitter after taste.

Getting to the free throw line is a primary goal of any offense in basketball. Today, against one of the most foul happy teams in the Big Ten, Michigan attempted a season high 37 free throws. Those free throw attempts (something I listed as a key in my preview) just happened to be Michigan’s undoing. The Wolverines made just 19 of those 37 attempts (51%) and missed freebie after freebie down the stretch, a primary reason the lead crumbled. Luckily, Michigan played well enough for the first 10 to 15 minutes of each half that it could afford to limp to the finish line.

Beyond the free throw woes and late game mistakes, Michigan’s offense played very well. Michigan shot 54% on twos and 53% on threes (both better than its 51% on FTs) for an effective field goal percentage of 62.8%. After shooting just 1 of 5 from three point range in the first half, Michigan went 7 of 10 from three in the second half. Numerous Michigan players are shooting the ball with confidence from the perimeter but it also feels like the quality of three point attempt has increased significantly over the last several games.

Michigan only turned the ball over on 17% of its possessions but five of the Wolverines’ 12 turnovers occurred in the final 4:30 of the game. Michigan had just one offensive rebound in the game for a meager 4% offensive rebounding rate. Michigan’s offensive efficiency came crashing to a halt in both halves after the Wolverines were in the bonus. This chart tells the story:

You can see that Michigan’s efficiency by half essentially tops out right before Indiana commits its seventh foul (circled in blue). This obviously makes sense when you consider the 18 points that Michigan left off the line but it also shows just how well Michigan played in other aspects of the game beyond the free throw line.

Michigan played great defense for stretches but Indiana found numerous wide open looks over the final 10 minutes. Overall, Michigan held Indiana to a respectable .99 points per possession. As sobering as it may be, this was just the second time that Michigan’s defense held a Big Ten opponent to under 1.00 points per trip. The Hoosiers posted an effective field goal percentage of 51% — 56% on twos and 25% on threes. Michigan fouled a bit too much, allowing a free throw rate (FTA/FGA) of 40%. However, Michigan’s defensive rebounding performance was just what the doctor ordered as the Wolverines grabbed 76% of Indiana’s misses. Forcing turnovers was a bit of a mixed bag. Michigan turned Indiana over 10 times in the first half compared to just 3 in the second half.

On an individual level, Michigan did a good job neutralizing several Hoosiers. Jordan Hulls scored 10 points on 4 of 9 shooting but didn’t make a three (0-4), Stu Douglass deserves credit for his off-the-ball defense here. Verdell Jones III and Christian Watford were productive down the stretch but Morris, Novak, and others did a great job negating them early on.

Most didn’t expect Michigan to hold a 16-10 (6-7 B10) record at this point in the season but now here they are. The final six games on Michigan’s schedule are undoubtedly difficult but this team is also playing significantly better and more confident basketball. Michigan probably needs three more wins to have a realistic shot but all that we can do is focus on the next game. That means a Wednesday night road trip to Champaign, IL. Despite the notion that the Illini are crumbling, they have only lost one home game this season (Ohio State).