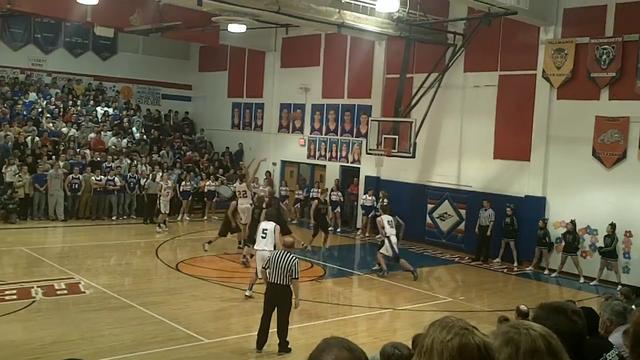 I made the trip down to Richfield, OH to watch Larry Nance Jr. in action. The senior forward prospect recently popped up on Michigan’s recruiting radar as a potential candidate to be offered Michigan’s final 2011 scholarship. Joe posted a lengthy interview with Nance and you can also find some video from earlier this year on his profile page. Nance had 16 points in tonight’s game versus Highland and here’s the video:

Scouting report after the jump.

Unfortunately, the level of opposition that Highland provided was subpar at best. Nance’s Revere squad was up by 20 points for almost the entire game and put in the the entire JV squad at the start of the fourth quarter when they were ahead by over 30 points. Attempting to judge talent is much harder against inferior talent for a number of reasons. It doesn’t prove anything to say that the player you want to watch is significantly better than the other team, so you are left trying to guess how much better. Add in the fact that the quality of the game generally deteriorates and you’re left with a tough puzzle.

The Good: Nance influenced the game in a number of ways with his length and was also solid offensively when he chose to be. He scored on a three, a dunk off an inbounds play, a midrange jump shot, and with a couple different moves in the post. The most impressive aspect of his game was his ability to use his length to block shots and force turnovers on the defensive end. He racked up a number of steals and blocks which usually led to easy points for his team. Nance appears to be a very good athlete and he displayed his athleticism several times, including a 360 dunk attempt. He’s not an electric athlete like his dad but still can elevate and finish. He was also solid on the glass, but level of competition comes into play there.

The Bad:  I would like to see him be more assertive offensively. Highland packed in its defense quite a bit but Nance didn’t really post up much until the second half. When he did go to the post he was very successful but he settled for too many threes early. He was playing on the perimeter for long stretches and didn’t seem to be able to generate much offense off the bounce. He didn’t appear to be a great shooter. He was something like 1-4 on threes and was probably around 50% from the free throw line as well.

Overall: Nance seems to be a classic jack-of-all-trades guy that can do a little bit of everything but won’t necessarily wow you in any one department. In a way, he kind of reminds me of Saginaw’s Tommie McCune (disclaimer: I haven’t seen McCune play in a while.). He’s this sort of undersized power forward with an offensive game that’s stuck between the perimeter and the post. He could play the four for Michigan but he would have to continue to develop his three point shot. His role would be similar to Colton Christian’s but I have a hard time comparing the two. I’ve seen Christian play 100 minutes of basketball against Division I competition and Nance play 24 minutes against a bad high school team.

His length seems like it could be very intriguing in the 1-3-1 zone as he tipped so many balls in Revere’s trapping defense. There’s also always the big x-factor, will he continue to grow? His dad grew 3 or 4 inches in college and a similar growth spurt would completely change Nance’s game.