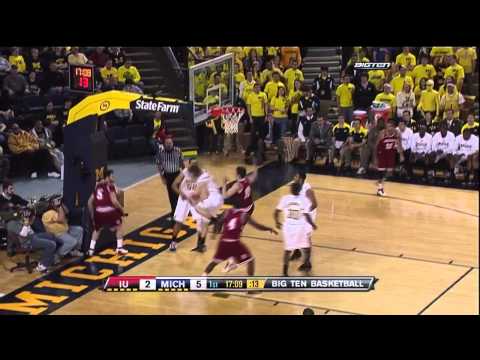 1) Jordan Morgan block and lay-in at the other end

This was a really impressive sequence from Jordan Morgan early in the game. Even though the big man didn’t have a great night — he struggled with fouls and couldn’t convert some of the looks inside he did against Northwestern — this series is a very good example of what he can accomplish when he runs the floor effectively. Morgan isn’t known for his shot-blocking ability, but he did a great job on help defense switching to Jeremiah Rivers when Zack Novak was picked. Jordan trailed him all the way to the basket and swatted Rivers’ layup attempt, which Zack followed and grabbed the defensive rebound. Zack pushes the ball ahead to Stu Douglass and Jordan is off and running. The big man fills the middle of the floor and makes himself visible to Stu, who gets him the ball in stride. Morgan does a nice job finishing a contested lay-in at the rim. This is a good example of the damage Morgan can do when he runs the floor and he wasn’t beating a slower post player down the floor, he ran past a five guard Indiana lineup.

The second half of this game mirrored the first half, with Michigan jumping out to a big lead early. However, this half differed from the first half in how Michigan jumped out to that lead. While Michigan was only 1-5 from beyond the arc in the first half, the second half saw the Wolverines knock down 7 of their 10 3-point attempts. These first four triples all came within the first three minutes of the second frame and caused Michigan to jump out to a 16-point lead. And it’s a good thing they did — as we’ll get to later, Michigan saw this big lead evaporate late in the game and with all the missed free throws Michigan would need all the cushion it could get. Dylan wrote in the recap that Michgan’s 3-point attempts appear to be getting better/more open/more in-rhythm. I’m not sure how good of an example of that these provide, but all of them were good shots. Zack Novak did a great job dishing for open 3-pointers all night (he had 6 assists) and that’s what he did on Stu’s first shot. Novak’s last 3-pointer is also notable because it came in transition. Crean referenced stopping Michigan’s transition game as a key part of his game plan his team didn’t execute.

This felt a bit like deja vu from the Northwestern game, but Tim Hardaway is giving us no choice: he has become a fixture in Five Key Plays because his play has improved so much down the stretch. Hardaway, much like he did against Northwestern, took over the game for a period in the second half. Starting at around the 10-minute mark, the freshman went on his own personal 11-0 run against the Hoosiers, scoring in a myriad of ways. Tim was able to get open at the 3-point line and use his quick release John Beilein’s always talking about to get shots off with defenders in his face; he took the ball to the rack, getting an and-1; and he also scored on a tremendous back-door cut and the feed from Zack. I’m not sure who thought it would be a good idea to put Daniel Moore on Hardaway, but it obviously didn’t work. Tim continues to improve and evolve as a player in nearly every facet of his game, most of all shot selection and finishing at the rim. On the last play, you can see Michigan basically just run a clear out isolation play for Hardaway and he abuses Victor Oladipo. The biggest difference between Hardaway now and two months ago is that he’s scoring in so many different ways.

4) Michigan turnovers late in the game

This isn’t fun to watch, but it was about as key as it gets. Michigan did two things that guaranteed a close game with Indiana at the end: turn the ball over and miss free throws (we’ll get to the latter in the fifth key play). This video highlights a few of the late-game turnovers that plagued Michigan and allowed the Hoosiers to make their epic comeback. These turnovers seemed to be largely a result of getting out of attack mode and trying to run clock. Michigan quit being aggressive late in the game and got a little complacent. The players talked about this in the locker room after the game, with Darius even saying they started playing “not to lose” instead of playing to win. It seriously threw off the rhythm the Wolverines had developed throughout the game and caused them to be a little careless with the ball.

42.1 percent. That was Michigan’s free throw shooting percentage in the second half. The worst part is that when I saw it, it seemed high to me after watching the game. From around the 5-minute mark until the end of the game, Michigan missed 11 free throws. John Beilein, in his post-game press conference, pretty much dismissed the massive Indiana comeback as purely a result of missing foul shots. He’s probably right — well, that and the turnovers. He didn’t say the players would be doing anything different in practice regarding free throws, but hinted he might rep them a little more. The coach seemed to look at it as a weird anomaly, which is probably smart. Michigan hasn’t been great at free throws in the Big Ten, but they’ve been good enough. It was horrible to watch the Wolverines from the charity stripe last night, but I don’t think we’ll see ineptitude of that level again. At least I hope we won’t.