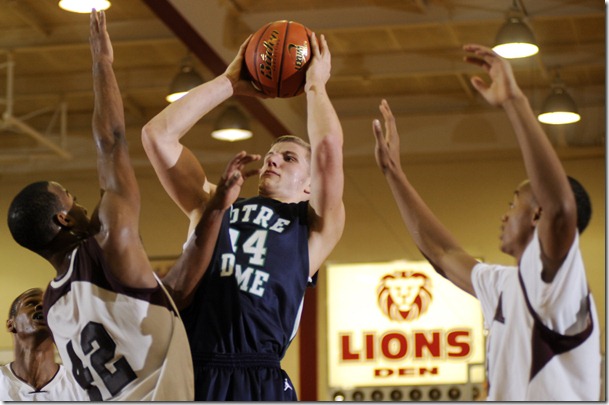 We do our fair share of first hand scouting here but we also receive e-mails from readers that make it out to more high school games than Joe and I could on our own. We’ve been trying to figure out what to do with some of this content and decided to experiment with a semi-regular user contributed scouting reports post. These aren’t our first hand impressions but they are still useful additions from readers that have made it out to watch these kids in action.

To start, here are some reports from the field on Max Bielfedt’s performance on Friday night as well as notes from the Flint Powers vs. Carman Ainsworth game featuring Javontae Hawkins and Denzel Watts. All are after the jump to conserve front page space.

As the above article mentions both John Beilein and Bruce Weber were in attendance for the game last night. Richwoods did not have anyone that could match up man-to-man with Bielfeldt, as he normally had three inches and twenty pounds on the person who was guarding him, so he saw immediate double teams throughout the game. Max was bothered by the double teams in the first half with a couple of turnovers but showed better awareness of them as the game went along.

Strengths
Several times in the game Bielfeldt would receive the ball around the high post and then face up on his man to take him off the dribble. He showed a shot fake that worked several times which allowed him to get by his man and drive towards the basket. It appears that he can handle the ball relatively well for a guy his size that plays in the post but he does not have quite the handle of Nance Jr. Bielfeldt showed good touch around the basket and a consistent motion on his free throws. His misses from the line were shots that were halfway down. He only took one jump shot from outside five feet and made it. He clearly realized he strength is in the post and didn’t try to float outside and put up outside shots to impress the coaches.

Weaknesses
What everyone already believes is true, Bielfeldt lacks the athleticism and quickness of better prospects. He threw down a one-handed slam from completely standing still but his lack of quickness hurt him in other areas. There were multiple times where he beat his guy with the shot fake and should have exploded to the basket for a dunk but was too slow and another player was able to rotate and usually ended up fouling him on his shot attempt.

Bielfeldt didn’t do a great job getting post position against the zone and seemed content to catch the ball around 8 to 10 feet away from the hoop.  Like many young big men, it felt like Bielfledt could have played with a bit higher motor. He probably could have racked up even more points and rebounds than he did.

First off, Watts was extremely impressive for a sophomore. He definitely looks older, as his upper body has filled out nicely. He’s not huge but he is not so skinny like so many other prospects. He has a pretty smooth jump shot with good rotation and a little bit of leg-kick that will need to be worked on, but nothing major.

Strengths: Perhaps the best part of Watts’s game is his passing. He always made the right pass, although he tends to jump to pass a little too often. Nevertheless, he had four assists and two or three other passes that just weren’t converted. Watts’s body control is also admirable. He made a couple very nice pull-ups completely under control, something many college players struggle with. He also can use the glass when needed, banking in a couple nice mid-range shots, including one very nice turnaround jumper. Watts is fairly fast, but doesn’t explode out of control. His quickness doesn’t jump out, but he always seemed to get past his defender when he wanted to. Unlike many high-schoolers, Watts also knew when to shoot and when to pass. 18 shots seems like a lot, but he never seemed to just try to take over by himself, for better or worse. Two of his missed threes were on long buzzer attempts as well. On defense, Watts was also fairly adept at getting his hands into passing lanes, tipping a couple balls leading to turnovers and fast breaks.

Weaknesses: While Watts finished with a pretty nice stat line, he was quite streaky. 14 of his 19 points came in the second quarter, which quickly turned into the Denzel Watts show as Carman-Ainsworth pulled back into the game to trail by only three at the half. In the second quarter, Watts was five of seven from the field, including two for four from three-point land, and collected three assists, one rebound, one steal, and one turnover. In the first quarter, I was wondering if I was watching the wrong player, because Watts was nearly invisible as Powers ran out to a 10-4 lead. Watts combined for five points on one of nine field goal shooting the in second half. While he was integral in the comeback, he never put the team on his back and really only had one fantastic quarter. Defensively, Watts appeared to be a little uninterested at times playing at the top of the 1-1-3 and 1-2-2 zones that CA threw out. His defender often blew by him, making Watts appear fairly slow laterally. He also jumps off his feet far too often on defense, either leading to a foul or a blow-by.

Overall: Watts is a tremendous prospect at this point. He’s talented and can fill up the statsheet. The 2013 class features some great point guards including Monte Morris, Derrick Walton, Cha Cha Tucker but Watts definitely looks like he should be in the mix.

He shot the ball pretty well and displayed some great range on his three and some tremendous leaping ability, especially on the offensive glass. Here is a breakdown of strengths and weaknesses:

Strengths:  Hawkins is an athletic wing that either shoots from deep or finishes inside. He has a nice three point shot, but it is a little bit of a slow release. The rotation is nice and he can create a shot for himself, but rarely shot in a catch-and-shoot situation. His length and athleticism allowed him to be a great rebounder, and he always seemed to get his hands on Powers’ misses. He brought the crowd to its feet one time with a huge put-back throwdown and missed two big one-handed dunks. He made two NBA-range three-pointers and converted on an array of put-backs around the hoop. He also showed a bit of driving ability, one time going baseline and converting a reverse layup, but for the most part he either received passes, took a couple dribbles and shot or rebounded misses and put them back up for his points. He was excellent on defense, always staying with his man and recording one nice block.

Weaknesses: The thing that disappointed me most with Hawkins was that he didn’t really drive the ball at all, which Michigan could use a little more of. While he was great on the offensive boards, he also missed a couple of close shots around the hoop, one time getting the rebound, bricking the put-back off the front of the rim, got his own rebound again, and then proceeded to miss off the front of the rim again. He also missed two dunks that could have been easily dropped in with his athleticism.

Overall: Overall, Hawkins was very impressive, easily leading his team in scoring. He is a super athlete and an above-average shooter and can impact the game defensively with his length. As he develops, I expect him to gain a little bit of a dribble-drive game to go along with his shooting and athleticism. I would not be disappointed at all if he came to Michigan. It’s hard to say who I would prefer out of Hawkins and Dorsey-Walker, but based off of just one game apiece I would give the slight edge to Hawkins.