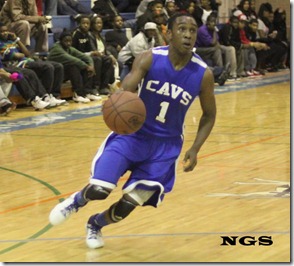 I caught up with Denzel Watts, a 2013 guard prospect out of Flint Carman-Ainsworth, to discuss his recruitment. Watts had a strong summer with Team Detroit and has followed up with a strong high school season, averaging 20 points per game. (Photo Credit: Next Generation Sports)

Here’s what Watts had to say:

Describe your game. I’m the type of guy who likes to get to the hole with my dribbling skills, then if you stop me from getting to the hole I have a perimeter shot. And then I’ve also got a long-range shot.

Which schools have been contacting you? Michigan, Michigan State, Purdue, USC, Florida State, Dayton University. Those are the major ones.

Which coaches have been talking to you from Michigan? Coach Beilein and Coach Bacari.

Have they been coming to any games or practices? Yeah they came to a lot of my AAU games. But Dayton University came to my practice like the second week in the season.

You recently visited Michigan, correct? Yeah, I was there last night. (For the Northwestern game.)

Any future visits planned? Over the summer, yeah.

Are you planning on going to any other schools any time soon? Yeah I’ve got Purude, and then I’m going to go visit USC this summer and schools like Florida International.

What do you like about Michigan? I like their style of play. They like to shoot it, and I like to shoot it too. But if their shots aren’t falling they still have the ability to take it to the basket so I just like they’re whole uptempo basketball style.

How do you see yourself fitting into Michigan’s offense? I see myself fitting into their offense because they like the uptempo game and that’s my kind of game and also if they have an open shot off the break they’re going to stop and pull it up .

Any player people compare you to? I’ve been compared to Mateen Cleaves. I was compared to him my freshman year.

What are you ultimately looking for in a school? The main thing is I’m looking for an education. I’m going to make sure I can get a great education and then I’ll look at the athletic part and make sure I have a coach who I can fit into his style of play. I don’t want to go somewhere where I’m not comfortable and I want to feel like I’m at home.