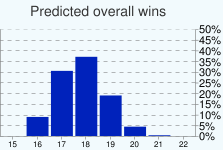 Save the RPIs and bubble breakdowns for now. There’s still a lot of work to do if Michigan wants to celebrate on Selection Sunday. The ball is officially in Michigan’s court. This isn’t a scenario where Michigan can knock off a couple average teams to cement a bid, the Wolverines will have to earn it. Michigan will probably only be favored in one (maybe two) of its final five games and needs a handful of wins (at least 3) to even be considered for an at-large bid.

The good news is that the final five games provide just what Michigan needs: an opportunity to add more “quality” or RPI top 50 wins. Right now Michigan has two (barely) quality wins: a home win over Harvard (44) and a road win over Michigan State (47). The final stretch includes four games versus RPI top 50 opponents: at Illinois (39), Wisconsin (18), at Minnesota (35), and Michigan State (47). Wisconsin might be the most important, given the Badgers’ top 25 RPI ranking, and could be the statement win that truly puts Michigan into the conversation. Win a handful of these final games and the rest will take care of itself. Here’s a brief look at Michigan’s remaining schedule, team-by-team, and our best attempt to decipher Michigan’s chances.

Illinois, 3-6 over its last nine games, is certainly going through a bit of a rough patch. Bruce Weber is calling out his team in the national media while complaining about runners and agents. That’s never a good sign. Despite all of the problems, Illinois still has one of the most talented rosters in the league. Even if Demetri McCamey might only play when he wants to, he’s still capable of taking just about any game over. Illinois also has size with Mike Tisdale (7-1), Mike Davis (6-9), Jereme Richmond (6-8), and Bill Cole (6-9). Despite the tall roster, the Illini are more of a jump shooting team and not great on the glass. Michigan’s problem is that it’s very difficult to contest jump shots when they are shot by such tall players. The game also happens to be on the road at Assembly Hall, where Michigan last won in 1995.

Michigan’s last two games in Iowa City have been rollercoaster rides. Both games went to overtime and were neck and neck roughly the entire way. Last year Michigan tied the game with a late DeShawn Sims three and the year before Manny Harris was benched in overtime. Iowa has been rapidly improving with recent wins over Indiana (x2) and Michigan State and even an overtime home loss to Wisconsin. However, the Hawkeyes suffered through an emphatic home loss to Minnesota which silenced most of the resurgence talk.  Michigan opened a pretty big lead the first time these teams met but if the last two games didn’t make it obvious, the road is a whole different ball game. However, this is Michigan’s best chance to steal a road game and a game the Wolverines would win in the most likely scenarios to get to 9-9.

Wisconsin is the only Big Ten team that John Beilein has never beaten. Beilein is 0-8 against Bo Ryan and the Wolverines have actually been more successful on the road than at home. The games at Crisler have never really been close: 62-44, 73-61, 79-54. Wisconsin has looked somewhat vulnerable on the road, with losses at Illinois, Michigan State, and Penn State and even an overtime win at Iowa. However, recent history tells us that this one won’t be easy. This might be Michigan’s most important game of the season because a home game against a top 25 team is the perfect opportunity for an upset.

Minnesota is another team that appears to be slowly falling apart. First, Devoe Joseph left the program and then Al Nolen got hurt. Now the Gophers are stuck without a true point guard option. Blake Hoffarber has done his best but is most effective when he’s shooting the ball, not distributing it. Still, Minnesota beat Michigan at Crisler Arena despite Nolen missing the second half. Minnesota has enough size and rebounding ability to take over any game with big guys like Trevor Mbakwe, Ralph Sampson III, and Colton Iverson. Michigan’s recent success against Minnesota (wins in four of the last five) provides at least some hope that Mcihigan could steal one on the road.

As things look now, this game is setting up to be a huge game for both teams. Michigan will look for its first two-game-sweep of the Spartans since 1997 and the game will likely have postseason implications for both teams. Michigan State won a heartbreaker in Crisler Arena last year but Michigan shocked the Spartans in East Lansing this year. Michigan State finally won a “should win” game, at home over Penn State, and if they can win a few more they will be right in the thick of the NCAA bubble conversation.

Michigan sits at 16-10 (6-7) right now with five games to play. Pomeroy’s recent predictions say that there is about a 25% chance that Michigan will push its conference record to .500 or better. Looking at the schedule, it’s clear that no game will be easy.

On this date two years ago, Michigan actually held an identical record: 16-10 (6-7). The Wolverines finished 3-2 with home wins over Minnesota and Purdue as well as an improbable road upset at Minnesota. There are certainly more enviable situations to be in but now it’s time to play the games and see if Michigan can play its way into the tournament.

How many more regular season games do you see Michigan winning?