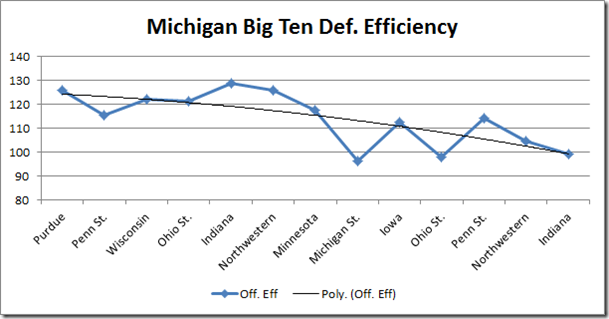 Michigan has been relatively successful on the road this season. The Wolverines have already won games at Clemson, Michigan State and Penn State – three of their biggest wins this season. The challenge gets tougher as Michigan heads to Assembly Hall, a venue where Michigan hasn’t won since 1995, to face off against a very talented Illini squad.

A quick rundown of the Illini schedule leads to the immediate conclusion that Illinois is struggling. Bruce Weber’s senior laden squad entered Big Ten play on a 2-game losing streak and is just 6-6 in conference games. When you dig a little deeper, one thing becomes very clear: Illinois is a great home team. The Illini have just two home losses and they were to Purdue and Ohio State, two of the league’s top three teams. Things aren’t perfect in Champaign, far from it, but they certainly could be worse.

Illinois is led by a trio of seniors that feel like they’ve been wearing blue and orange for ages: Demetri McCamey, Mike Davis, and Mike Tisdale. McCamey is a burly lead guard that loves to setup his teammates but can also score points in bunches. McCamey is averaging 14 poins and 7 assists while shooting 42% on twos and 47% on threes on the season. His recent form has been substandard, averaging just 9 points, four assists, and four turnovers with a 36% effective field goal percentage over the last six games. Tisdale (7-1) and Davis (6-9) are still the same players that they’ve been throughout their careers, tall rebounding jumpshooters:

The 7-foot jumpshooter is a rare breed but it’s very tough to defend. Despite the high proportion of jump shots, Tisdale and Davis both connect on around 52% of their twos and Tisdale can even step out and hit a three (35%). Sophomore guards DJ Richardson and Brandon Paul both average a shade under 10 points per game and have the ability to slash to the basket or but are both above average three point shooters (Paul 36%, Richardson 41%). 6-foot-8 Jereme Richmond might be the most promising professional prospect on the Illini roster. The wing forward has size, handles, slashing ability, and can crash the boards. 6-foot-9 Bill Cole has the best offensive rating in the country and he prefers to shoot threes (42%) and is just 20 of 30 inside the arc.

Defense has been the strong point for the Illini in conference play. Illinois is allowing a conference best 1.02 points per trip thanks to the best two point (44%) and three point (30%) shooting percentage defense in the league. Illinois doesn’t force turnovers (10th) and is just an average at defensive rebounding and preventing opposition free throws, but when your opponents can’t make shots the peripheral stats don’t matter much.

Illinois’ offense hasn’t been all that bad in conference play either, averaging 1.08 points per trip (4th). The Illini have a third best shooting team with a 53% effective field goal percentage – 50% on twos and 41% on threes – and also do a good job of getting to the free throw line. That’s not to say the Illinois offense doesn’t have any weaknesses. The Illini are coughing the ball up on 20% of their possessions (9th) and only rebound 30% of their missed shots (8th).

There are two common denominators in Illini losses: bad shooting and too many fouls. The Illini are 1-8 when held under a 50% effective field goal percentage and 15-1 when they break that mark. Illinois isn’t going to beat you with rebounding or foul shots, they need to shoot well to win. When Illinois holds its opponents to a free throw rate (FTA/FGA) under 43%, the Illini are 18-2, when they allow more free throws than that they are 0-7. The bad news for Michigan is that the Wolverines might be the team least equipped to exploit Illinois’ weaknesses. Michigan ranks 11th in free throw rate and 11th in effective field goal percentage defense.

There is some encouraging news… Michigan’s defense is steadily improving in conference play. Chart:

Part of this improvement has been due to an easier stretch of schedule but Michigan’s last six games are its best defensive performances in conference play. Michigan will struggle to contest shots, but if the Wolverines can clean up the defensive glass they should be able to at least hang around. Offensively, you have to attack the Illinois defense from the inside out and really hope to get Morris, Hardaway and Morgan involved going toward the hoop. If you don’t get inside the Illinois defense, you’ll be left trying to shoot over their long perimeter defenders.

Pomeroy gives Michigan a 16% chance at stealing the upset and predicts a 70-61 Illinois win. Going by the numbers, this is Michigan’s least probable win remaining on the schedule. Three weeks ago, with their season left for dead, the Wolverines defied the odds and broke a 13 year losing streak in East Lansing. That game seemed to revive Michigan’s season but breaking another, longer, streak is still a tall task.