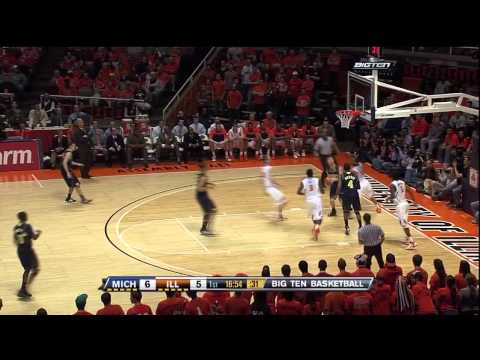 Tim Doyle, who was unfortunately calling the game last night, almost had a heart attack every time Michigan ran the floor and constantly called for the Wolverines to slow it down. Michigan is by no means a fast-break team, but with Darius Morris on the floor it’s not always a horrible option. This play was a little flashy, but it was irrefutably awesome and turned out to be the right play to make in that situation. Darius gets the deflection off a long rebound and pushes the ball upcourt with Zack trailing slightly on his left side. Darius finds himself in a 2-on-2 situation with Demetri McCamey shading the passing lane from Darius to Zack. Darius throws a great behind-the-back pass to Zack before McCamey can react to it, and Zack makes a great pump-fake to finish strong. Michigan was very aggressive early on the offensive end, hitting their first five shots, and this was a great example of how that aggressiveness paid off.

2) Zack Novak’s backdoor cuts in the 2nd half

What we have here is a pair of beautifully executed back-door cuts by Zack Novak. Darius assisted on the first and Matt Vogrich assisted on the second. Darius and Matt both deserve recognition for these passes — both were tough plays to make — but this is also a great example of Zack doing exactly the right thing and cutting hard. If you’re going to make a backdoor cut, you have to cut hard, and that’s just what Zack does, from the same spot on the court each time. He starts out by drifting to the free-throw line extended and flashing for a pass. His defender bites in an attempt to deny him the ball, and Zack quickly reverses and bolts backdoor. Both times, his teammates found him for easy layups. It was nothing fancy but it was well executed and easy baskets like this are always a nice perk. It’s tough to call any basket more “key” than any other in this game for Michigan because they made so few, but getting easy layups was just what the Wolverines needed, especially when they didn’t seem to be bale to hit anything outside of 10 feet.

Here’s where this edition of Five Key Plays starts to get ugly. If you’re still stinging from this one, it might be best to skip the video. This is Demetri McCamey’s huge 3-pointer with 6:35 left to play that put the Illini up four. Michigan had brought the game to within one point despite continuing to make bad plays and miss shots down the stretch. It was at this point Michigan fans started thinking, “I can’t believe we’re still in this game, we might be able to steal it,” and then McCamey comes down the court and does what he’s been doing in the Big Ten for years now: hits a big shot. This was a really tough shot to defend, no matter how you slice it. Illinois ran McCamey through not one but two picks to get him an open look. First, Stu Douglass was picked by Tisdale. Then he was picked by D.J. Richardson just as McCamey received the ball. Stu did pretty much all he could — just a well-executed play by Illinois and a monster shot by McCamey, especially with single digits on the shot clock.

4) Michigan’s offense stalls down the stretch

These were some really discombobulated final possessions for Michigan . The Wolverines were down by three points for almost the last three minutes of the game, and simply couldn’t buy a bucket on multiple trips down the court. The shots they took weren’t great, especially settling for jumpshots on the first two possessions. On the first possession, Stu’s shot is truly ill-advised. Despite having a terrible shooting night, Douglass fired up a pull-up 18 foot jumper with over 20 seconds left on the shotclock. Michigan coaches continually stress the importance of every possession and this was a case where Michigan just wasted one. Darius’ pull-up on the next possession was similar, but the sophomore got a little more separation from his man and the shot clock was running down. On the last trip down, Beilein calls a timeout after running the shot clock down to 18 seconds and out of that Michigan gets a rushed layup in traffic as the shot clock expires. It certainly wasn’t what they were going for, but Darius’ miss on that play set up the final Key Play…

By the end of this play, I was on my knees on the floor of my buddy’s house and feeling like I’d been punched in the gut. This was a rough ending to a similarly rough game. Like Dylan said in the recap, we can argue about whether or not Evan Smotrycz should have driven to the hoop on that last shot or shot the 3-pointer until the cows come home. My two cents: go for the win on the road, it was as open as you’ll find a last shot to win the game. Nice pump-fake to get open, but he just couldn’t get it to fall. He has consistently made nice pump fakes this season but Smotrycz needs to do a better job of collection himself before he shoots, in this case it seemed that his momentum pushed his shot wide. On Stu’s actual last shot of the game, I’m actually pretty sure that would’ve been a two even if he would have made it. Agonizingly close nonetheless. The frustration from this game doesn’t stem from the fact that they lost, but the fact that Michigan could have so easily won if they would have simply hit a few more shots down the line.