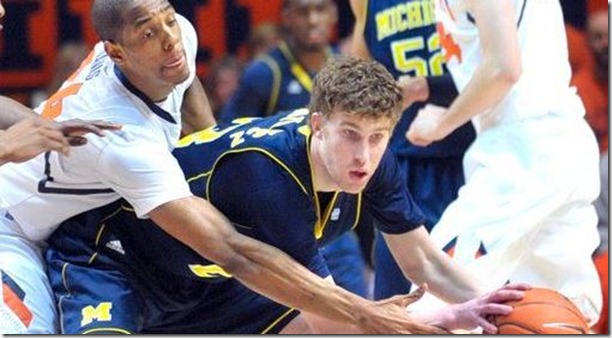 This one hurts and not just because of the agonizing nature of final seconds. It was painful because Michigan had a chance to win despite playing an excruciatingly poor offensive game and just couldn’t find the big play necessary to steal a win. In a way, Stu Douglass’ desperation heave was a microcosm of Michigan’s season: so close but just not quite enough.

I’m not going to focus much on the final play. Michigan tried to get Hardaway in an isolation situation and, as the Illinois defense overplayed him, he found Smotrycz for about as clean of a look as you could ask for. The argument as to whether Smotrycz should drive or shoot could go on for ages but I don’t think he could have got to the basket very easily. He’s more comfortable shooting the three and the percentages are close, 38% on threes and 43% on twos. The biggest problem was that Smotrycz seemed to rush a bit and never really got set after the pump fake.

Ultimately, this game wasn’t just about that possession. In a road game against a good team you can’t afford to throw away possessions down the stretch. Far too many times, Michigan was caught trying to do too much (bad shots) or not doing enough (standing around). Michigan failed to score on three consecutive possessions inside of four minutes while trailing by just three points. Those are the possessions you have to win to steal road games. Michigan made those plays in East Lansing but opportunity after opportunity went for nothing in Champaign.

Lost in the offensive struggles is the fact that this was Michigan’s best defensive game in Big Ten play. Michigan held Illinois to .90 points per possession and more impressively just .73 per trip in the second half. Michigan was abused by the high-low in the first half but made the right adjustments to negate Illinois’ size advantage in the second half. Illinois posted an eFG% of 48% – 56% on twos & 22% on threes – and only attempted 9 free throws on the game. Most importantly, Michigan did a great job on the defensive glass, grabbing 76% of Illinois’ missed shots. Illinois missed some open looks but Michigan’s second half defense was as good as we’ve seen.

Michigan’s offense just couldn’t get the job done. It wasn’t that Michigan was chucking threes, the Wolverines attempted just 18 threes to 41 twos, it was that Michigan just couldn’t make any of them. The Wolverines shot 49% on twos and 11% on threes for an effective field goal percentage of 39% for the game. Turnovers kept Michigan in the game as the Wolverines turned the ball over just four times all night. Perhaps the most disappointing stat was that despite the Illini committing their seventh team foul with 12:53 to play in the second half, Michigan attempted just three free throws from that point on.

The margin of error for Michigan’s NCAA tournament push has been reduced to almost nothing. With four games remaining on the schedule, Michigan needs at least three wins and one of them probably has to be over a Wisconsin team that John Beilein has never beat. Next up is a road game at Iowa – a game where Michigan won’t gain much from a win but can’t afford a loss.