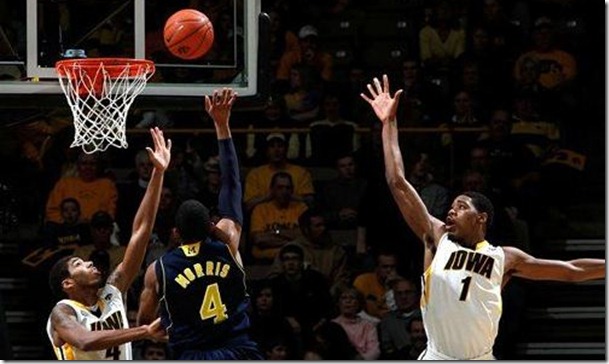 Any team can win when everyone plays well and every shot finds the net. It takes significantly more willpower and mental toughness to win a game when nothing comes easy. Michigan managed to escape Iowa City with an overtime win despite a first half that was filled with mistakes, fouls, and chaos. Things started spiraling out of control as Michigan’s offense stagnated and player after player went to the bench due to foul trouble. Bryce Cartwright’s 60-footer banking in at the buzzer felt like the culmination of a perfect storm of disaster. Luckily, Michigan’s fortunes would begin to shift at halftime as that basket was waved off and despite a forgettable half that couldn’t have gone much worse, the Wolverines trailed by just eight points at the break.

When the going gets tough, somebody has to put the team on their back. Today, it was Tim Hardaway Jr… again. The freshman wing has carried this team to past victories but did everything in his power to one-up himself tonight. Hardaway scored 30 points on just 14 shots and made big play after big play to will Michigan back into the game. Darius Morris and Jordan Morgan provided ample amounts of support, scoring 20 and 18 points respectively. When all was said and done, Hardaway, Morris and Morgan combined to score 68 of Michigan’s 75 points and the Wolverines escaped with a narrow overtime victory.

While all three played tremendous games, the biggest play of the game wasn’t one of Morris’ dazzling passes or Hardaway’s lethal three pointers. It was Jordan Morgan calmly hitting a pair of free throws to tie the game with :12 seconds remaining in regulation. Those are clutch makes for any player but for Morgan, a 53% free throw shooter, to step up and hit those shots on the road is impressive.

Michigan’s “big three” carried the offense but they did it efficiently, combining to make 22 of 33 shots for an effective field goal percentage of 77%. The rest of Michigan’s roster scored just 7 points on 2 of 19 shooting. Despite 91% of Michigan’s offensive production coming from just three players, the Wolverines managed to score a solid 1.08 points per possession. Free throws were paramount for Michigan’s offense, especially in the second half, as Michigan made 19 of 24 free throws. Michigan turned the ball over on 19% of its possessions and only rebounded a quarter of its misses.

Michigan’s defense was far from perfect but tough enough to get a few clutch stops. The Hawkeyes scored 1.04 points per possession and shot 59% on twos and 12% on threes. The Wolverines did a good job forcing turnovers as Iowa coughed it up on 23% of their possessions leading to 23 Michigan points. Fouls and subpar defensive rebounding consistently plagued the Wolverine defense. The Hawkeyes rebounded 41% of their misses and scored 11 second chance points. Iowa also made 18 of 22 free throws and Michigan’s fouls not only gave Iowa easy points but put starters on the bench.

As we’ve seen all season, this game was a hodgepodge compilation of both great and awful stretches. No road win is too ugly and Michigan simply couldn’t afford to lose this game. Now it’s on to a tough closing stretch of schedule – Wisconsin, at Minnesota, and Michigan State – that provide the opportunity for quality wins that Michigan needs.